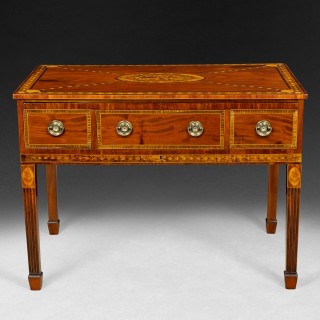 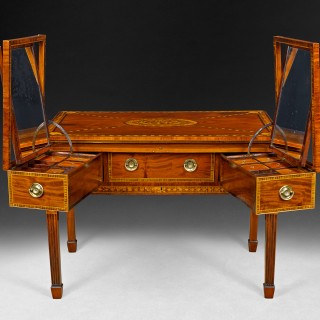 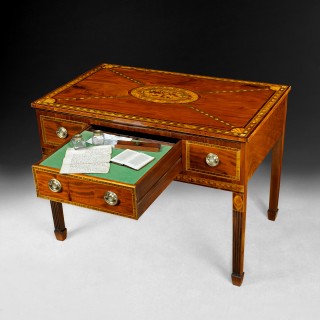 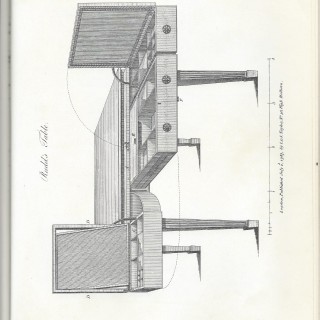 A truly rare and magnificent George III Period Mahogany and Marquetry Inlaid Dressing Table, the elaborately inlaid Flame Mahogany Rectangular Top with crossbanded edge above three drawers, the centre drawer fitted for writing and with a baize lined slide, the two flanking drawers opening to show fitted interiors with lidded boxes and infinitely adjustable mirrors, all the drawers crossbanded, the frieze with a band of marquetry raised on four fluted legs terminating in spade feet and having inlaid flowers

This model of table is both illustrated and described as “Rudd’s Table” in George Hepplewhite’s “The Cabinetmaker and Upholsterers Guide”. Thomas Shearer also published his version of the design which was carried in the “Cabinet-Makers’ London Book of Prices” and also described as “Rudd’s Table”. For both to have carried this description of the table means that the original, which this could be, was made recently enough to have been in their memories and for the Rudd Scandal to still have impacted on society throughout the 1780s.
It appears the original table was made for Margaret Caroline Rudd, an infamous forger and fraudster who left a trail of broken men behind her. This included the twins, Daniel and Robert Perreau who stood trial with her for forgery and were found guilty and hanged in 1775 though
she used her undoubted charms to secure a not guilty verdict for herself and died in 1779. This Georgian Scandal rocked the very pillars of the establishment including George III, John Wilkes, Lord Mansfield and many others. How did Hepplewhite and Shearer know what her dressing table looked like?

In the meantime we are indebted to George Hepplewhite whose widow, Alice, published a book of his designs for furniture two years after his 1786 death. “The Cabinetmaker and Upholsterers Guide” gave it’s author’s name to a whole period of designs from the last two decades of the 18th. century and on plate 79 we see the term “Rudd’s Table” used. George Hepplewhite was unknown during his lifetime and it is due to Alice’s business acumen that his name has survived. His style is a very traditionally based transition from the Gothic, Chinese, Rococo and Neo-classical idioms of Chippendale to the lighter lines and designs of Thomas Sheraton. However, in the notes to plate 79 he writes: “Rudd’s Table or Reflecting Dressing Table, This is the most complete dressing table made, possessing every convenience which can be wanted, or mechanism and ingenuity supply. It derives its name from a once popular character, for whom it is reported it was first invented.” It then describes the construction in greater detail. It is also interesting to see the inlays on this example which tally with suggestions in the preceding plate and elsewhere in the publication. This example also has the fluted legs as in Hepplewhite’s design

The centre drawer is fitted for writing and it is delightful to see how so many of the intricate little internal fitments still retain the original lids. Again, the crossbanding to the drawers is exactly as described by Hepplewhite. .Apparently, the Rudd Trial was as avidly followed and widely reported in George III’s reign as was the O J Simpson Trial in the USA some two centuries later.