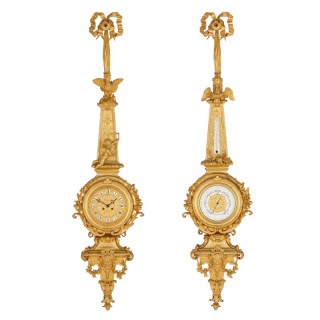 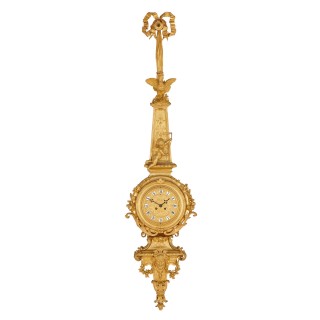 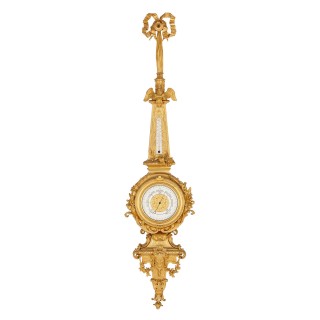 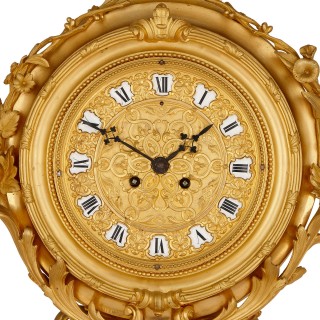 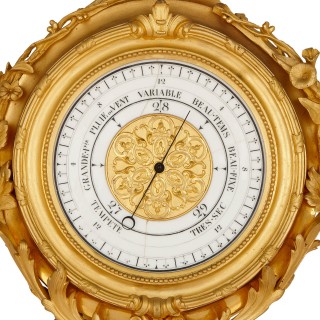 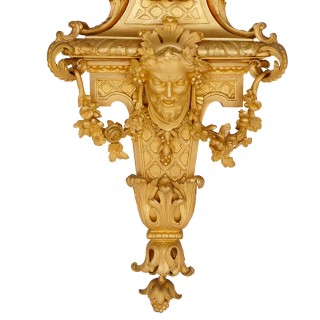 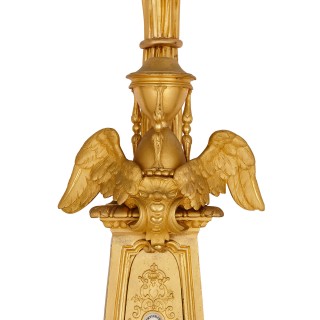 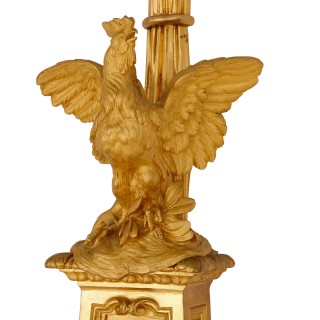 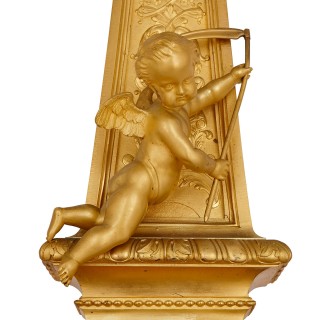 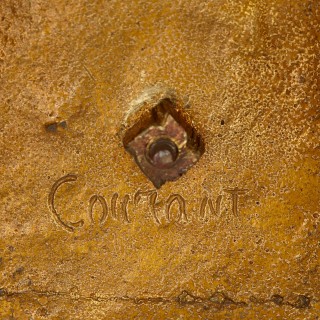 This stunning gilt bronze clock and barometer pair was created in c.1860 in France. The two have been attributed to Raingo Frères, the prestigious 19th Century clockmaking firm.

Founded by the Belgian-born Zacharie Joseph Raingo in 1813, the Raingo clockmaking company was passed down to Zacharie’s four sons, Adolphe, Charles, Denis and Dorsant. In 1823, the brothers officially changed the company name to the Raingo Frères. The firm produced clocks for an important international clientele, which included King George IV of England, and Emperor Napoleon III and Empress Eugenie of France. The Raingo Frères exhibited at major exhibitions held in France in the second half of the 19th Century, and were awarded a gold medal at the Paris Exposition Universelle of 1889.

The gilt bronze clock and barometer are similarly designed in a bold Neoclassical style. The back-plates take the form of ribbons, which are tied in bows at their tops, and which extend down to meet tapered pilasters. While the clock’s pilaster is topped by a sculpture of a cockerel, the barometer’s is crowned by a winged hourglass. The clock’s pilaster is decorated with swirling, foliate patterns and mounted with a cherub figure, who holds a scythe before him. By comparison, the barometer’s pilaster functions as a thermometer, which is accompanied by a bunch of flowers at its base.

Below, there are circular cases – one of which contains a clock- and the other a barometer dial. The highly-ornate gilt bronze clock dial features a minute and hour hand, and black Roman Numerals, set within white enamel compartments. By contrast, the white enamel barometer is marked with French weather readings, and has a gilt bronze centre, fitted with a pointer.

The cases are fitted with large pointed drop-finials, which are mounted with classical male masks and foliage swags. These terminate in leafy ends, with fruiting tips.