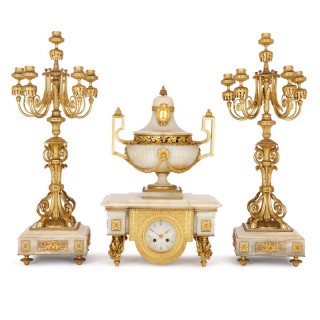 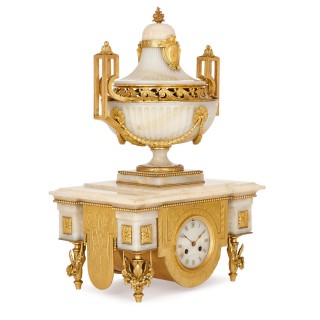 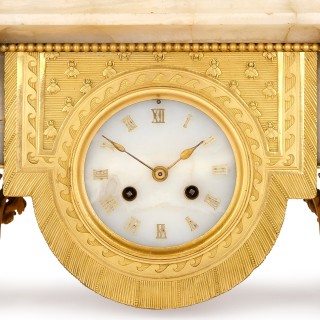 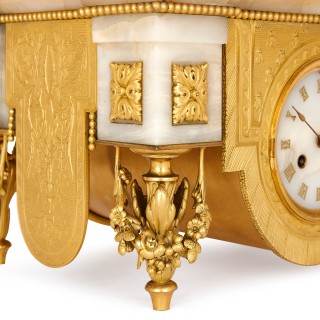 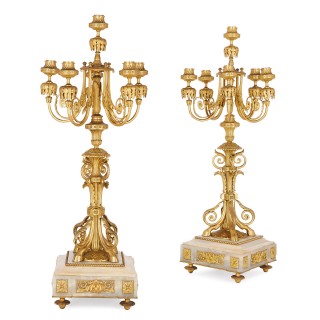 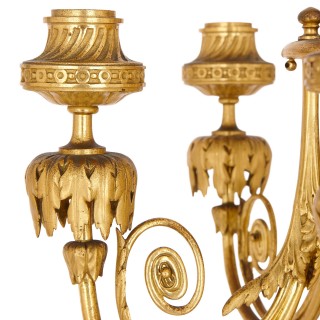 The white onyx and gilt bronze three-piece set consists of a central clock, accompanied by two six-light candelabra. The three items were crafted in the 19th Century, during the reign of Napoleon III (1852-1870), and have been attributed to Ferdinand Barbedienne. Barbedienne was a famous French bronzier and manufacturer, who ran one of the most well-known and successful foundries of Belle Époque Paris. The Barbedienne company created sculptures, clocks, and other decorative items which were created in fashionable 19th Century styles, and were of the finest quality. These were exhibited at a great number of art fairs and international shows, where they won multiple awards. Barbedienne’s most noteworthy prize was the Grane Médaille d’Honneur, which he was awarded at the Paris Exposition Universelle in 1855.

The clock stands on four gilt bronze feet, which are draped with floral swags. The white onyx clock body is rectangular in shape, and is stepped. The projecting corners of the body are decorated with rectangular, foliate gilt bronze mounts, and its top edge is articulated by gilt bronze beading. The circular dial — which displays gilt Roman Numerals — is placed so that it partly sits on the onyx block, and partly occupies the space below it. It is set within a slim, gilt bronze case, which is ornamented with a wavy border, bees, and fine incised lines. Above, the body is surmounted by a Neoclassical style, fluted white onyx urn, which is mounted with gilt bronze beading, a floral swag, and two geometric handles. It also features a gilt bronze frieze, pierced with gilt bronze wave patterns, as well as a gilt bronze cartouche and flower finial.

Accompanying the clock are two candelabra, which are similarly designed. These are raised up on four gilt bronze toupie feet, set on square, white onyx bases, which are mounted with foliate, gilt bronze ornament. Above, the gilt bronze candelabra stand on four hoof feet, which scroll upwards in vine-like forms. These leafy vines wind around the entire length of the fluted stems. Each candelabrum has five lights, which curl up around the stem, terminating in fluted capitals, which stand on beds of acanthus leaves. A sixth light, which is identically designed, tops the stem.

While it was crafted in the 19th Century — over 150 years ago — this clock set has a distinctly modern feel to it. This is perhaps owing to its inventive use of classical motifs, and by the combination of the smooth white onyx and shining gilt bronze. Accordingly, this set will suit either a traditional or contemporary interior.