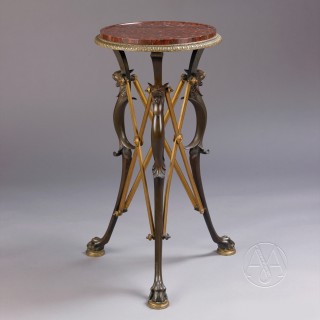 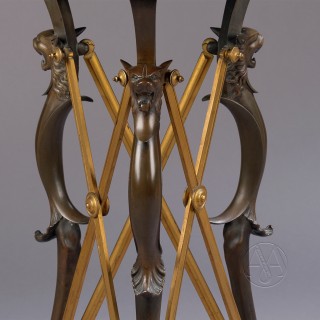 This striking gueridon has a circular inset rouge griotte marble top within a gilt-bronze egg and dart border. The top is supported on three patinated bronze monopodia supports with stylised lions heads and paws and united by gilt-bronze ‘X’ – form cross stretchers.

The design for a plateau or stand, with comparative stylised monopodia supports, by Ferdinand Levillain and cast by Barbedienne, was illustrated in the 1889 Gazette des Beaux-Arts and reproduced by Jonathan Meyer in his book Great Exhibitions.

In 1878 he ceased his collaboration with Barbedienne and triumphed alone at the Exposition Universelle, where he won the gold medal for his work referrencing the Antiquity.

In 1892 he was recognised with the highly prestigious ‘Legion d’Honneur’. Examples of his work are displayed in many museums including the ‘Musée de Lyon’ and the ‘Musée d’Art Moderne’ in Paris.

Levillain also collaborated with the Sevres manufactory and won several medals, which are still visible today at the Louvre Museum and the Musee des Beaux Arts in Angers.

Ferdinand Barbedienne (1810-1892) was the inspiration and driving force behind one of the most important French art foundries. He pioneered the use of mounts and, more commonly, bronze sculpture including figures and animals. Barbedienne produced catalogues of bronze reproductions of Greek and Roman classical sculpture and experimented with ‘champlève’ and ‘cloisonné’ enamels during the third quarter of the century.

The Barbedienne foundry handled the casting of numerous national monuments and architectural schemes. Ferdinand Barbedienne himself also took an active part in the promotion of contemporary sculpture and became one of the founders for Davis d’Angers’ medallions as well as much of Rude’s sculpture.

In 1850 Barbedienne was commissioned to furnish the Paris town hall for which he was awarded with the ‘medaille d’ honneur’ at the Paris Exposition Universelle in 1855.