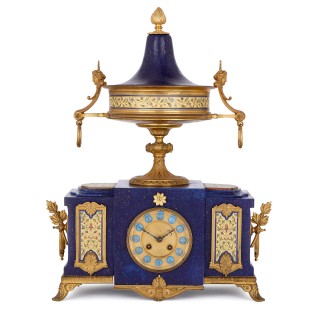 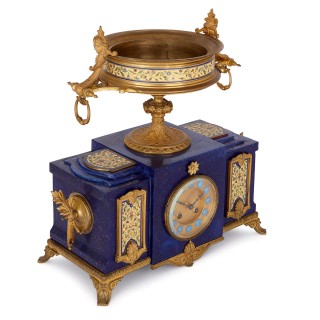 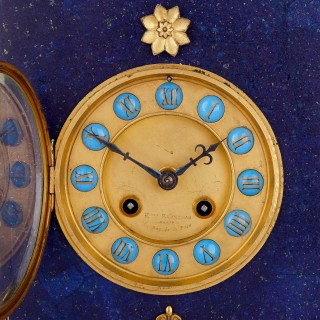 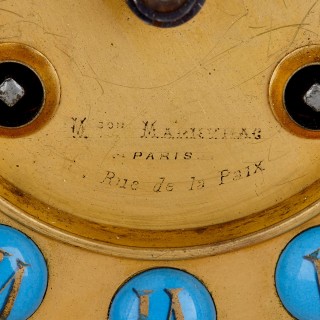 This Grecian style mantel clock was crafted at the end of the 19th Century and retailed by the acclaimed Maison Marnyhac, which was based on the Rue de la Paix in Paris.

Founded in the mid-19th Century by Charles de Marnyhac, the company employed expert designers and craftsmen, specialising in the creation of luxury goods. The Maison Marnyhac won a medal at The Exposition Universalle of 1878, where they competed with prestigious companies, such as Barbedienne. This clock face is signed ‘Mcon Marnyhac Paris Rue de la Paix’.

The clock consists of a stepped rectangular body which is topped by a Grecian style urn. The piece has been crafted in gilt bronze, whilst the body and lid of the urn have been veneered in lapis lazuli, the deep blue coloured gemstone. The lapis lazuli veneer is a later addition to the clock.

Supported on elegant gilt metal feet, the clock features a central face, with Roman numeral numbers, enclosed in royal blue enamel medallions. Either side are cloisonne enamel yellow plaques, which are decorated with intricate foliate patterns, and contained within gilt bronze frames. Two similar plaques are found above them, on the shoulders of the clock. Two handles, which take the form of laurel branches, are fixed to the sides of the piece.

The Grecian urn that crowns the clock has been beautifully decorated with egg and dart detailing, swirling motifs and acanthus leaves on its stem. The body of the urn is encircled by a cloissone enamel band of similar design to the lower plaques. It is finished with twin handles, which are ornamented with classicising rings and female masks. A gilt acorn finial surmounts the removable lapis lazuli lid.