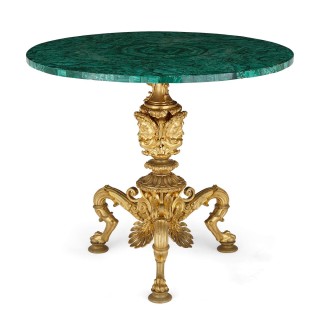 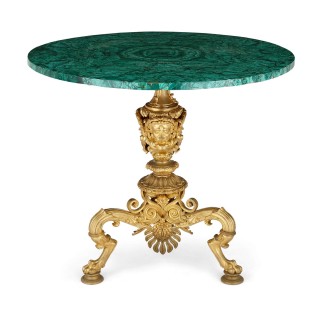 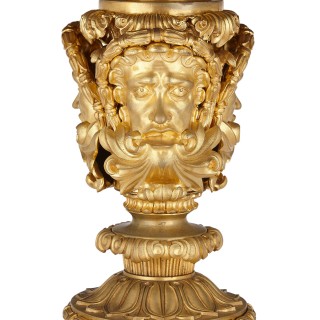 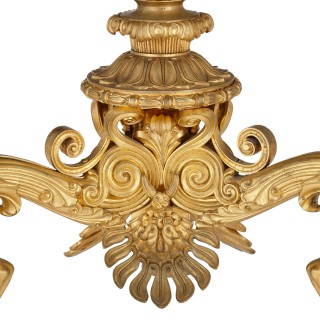 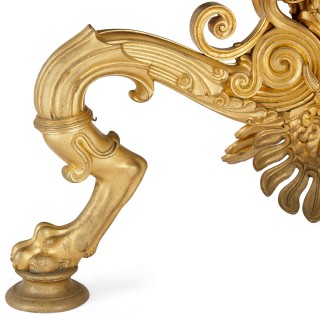 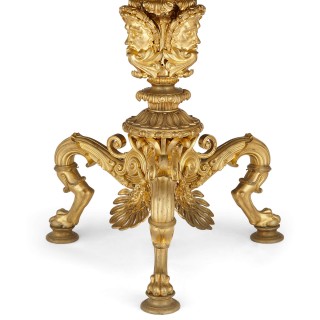 Nicholas I period Russian malachite side table with gilt bronze base

This is a truly exceptional piece, representing some of the most extravagant craftsmanship of the early 19th Century in Russia. Following Russia’s victory over Napoleon in 1812, there was a new mood in Russia, one of celebration and self-confidence. It was this mood which eventually found its way into the world of decorative arts, as innovative architects and makers were invited to design the palaces of Tsar Nicholas I. Malachite was one of the new materials which found favour among Russian designers, for its intense green colour and its preciousness. Indeed, in the later 1830s, the wife of Tsar Nicholas I, Empress Alexandra Feodorovna, commissioned an entire room in St Petersburg’s Winter Palace to be made entirely out of malachite. Consequently, many new lapidary workshops started to emerge in the early 19th Century, a majority of which worked to make beautiful, extravagant pieces in malachite using the new ‘Russian mosaic’ technique, which allowed malachite veneers to be applied to extremely large and exquisite pieces.

The ‘Russian mosaic’ veneering method has been used to stunning effect on the circular top of this table. It is supported by a cylindrical gilt bronze stem which has been mounted with grotesque masks and is set on a curved fluted tripod base on paw feet. The base also features further gilt bronze ornamentation, including leaves, egg and dart and s-scrolls.

Nicholas I period Russian malachite side table with gilt bronze base