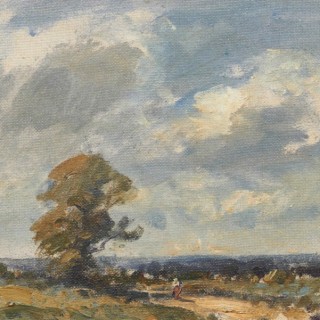 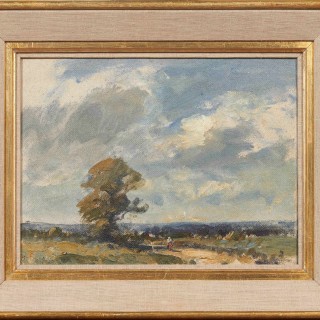 In May 1957, when I was staying at the Dutch House, Edward Seago painted this sketch for me in illustration of a conversation we had about the discipline of a limited palette. The colours were ultra marine, alizarin and yellow ochre.

Probably the best known of the late twentieth century landscape painters, he was an East Anglian artist by heritage and inclination. Without formal training he took private tuition from Bertram Priestman RA and was encouraged by the local celebrity, Sir Alfred Munnings. Munnings advice and contacts led to a lucrative early career in equestrian portraiture. Service during the second war led to his attachment to Field Marshall Alexander of Tunis to record the Italian Campaign. In peacetime Seago enjoyed a celebrity status in the London art world of the 1950s and 60s. His shows at Colnaghi’s enjoyed the previously unknown phenomenon of queues of excited buyers waiting for the doors to open. He was a great friend and favourite of the Royal Family, accompanying HRH Prince Philip on Britannia’s 1956 tour of the South the Antarctic, the south Atlantic and West Africa. As a result many of his paintings are held in the Royal Collection as well as the Guildhall Art Gallery, the Government Art Collection, the National Portrait Gallery, the Imperial War Museum, Pallant House and the Yale Centre for British Art amongst many others.