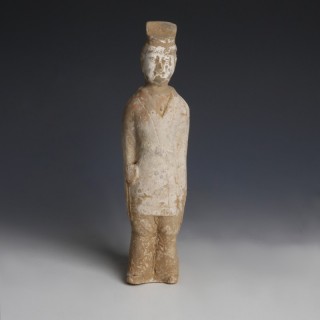 A Northern Qi court attendant terracotta figurine. The attendant is shown standing with his harms along the body, wearing a traditional ceremonial hat, long vest and gown tied at the waist. Poking out at the collar is a roll of fabric of the undergarments. A hole on the top of the right hand for offerings, such as incense. Traces of the original pigmentation are visible on the body and face of the figurine. The are a large number of attendants found in Northern Qi Dynasty tombs, indicating the need to have sufficient help in the afterlife. As in life, attendant figures are depicted standing and waiting to fill the desires and needs of the deceased.

Fine, with signs of ageing and earthy encrustations on the surface.