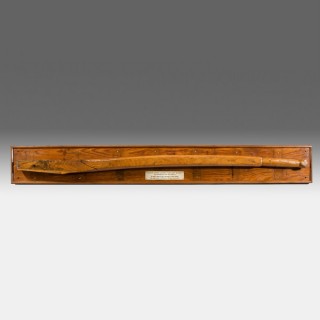 The tiller is from author Arthur Ransome’s yacht ‘Nancy Blackett’, named after the fictional pirate captain in his Swallows and Amazons series. The yacht also starred in another of his books, ‘we Didn;t Mean To Go To Sea’ in which was called ‘Goblin’.

The yacht was found semi derelict in Scarborough Harbournin 1988 and was then taken over by the Nancy Blackett Trust and has since undergone extensive restoration.