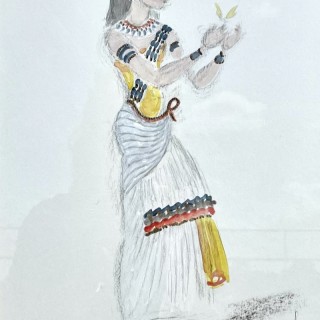 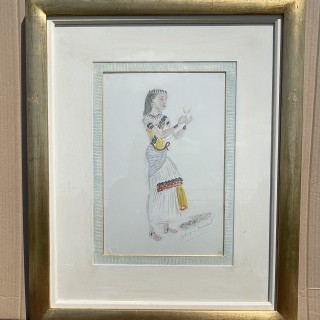 Born in London, Messel was the grandson of the illustrator Linley Sambourne. After Eton he studied art at the Slade School of Art and by the early 1930s had established himself as one of Britain’s principal stage designers. Initially working for the Cochran Revues, he went on to design for many theatrical, operatic, ballet and film productions. His books included Stage Designs and Costumes, 1933; Designs for A Midsummer Night’s Dream, 1957 and Delightful Food, 1958. He exhibited at the Leicester Galleries and Redfern Gallery and also designed interiors and gardens of the Dorchester Hotel, Flaxley Abbey, Gloucestershire and elsewhere as well as several houses and grounds in Barbados and Mustique. The Victoria & Albert Museum hold the majority of his design archives.

The present work is a costume design for the 1945 film Caesar and Cleopatra, directed by Gabriel Pascal and staring Claude Rains, Vivien Leigh, Stewart Granger and Flora Robson. Messel designed the costumes, props and interior decorations for what was billed as one of the most lavish movies of all times, costing over a million pounds. It was an amazing production to be achieved in a time of extreme austerity towards of the end of World War II, filming starting just a few days after D-Day. In addition to his meticulous historical research, at this time of rationing Messel had to show enormous resourcefulness and improvisation sourcing his materials and fabrics.