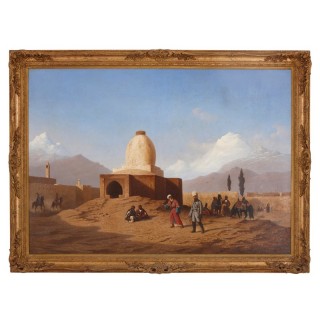 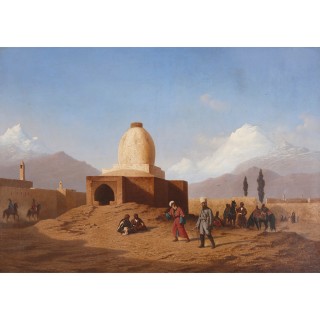 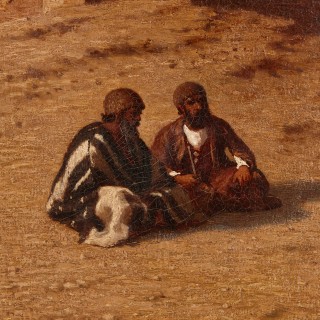 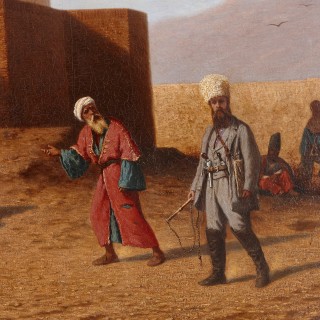 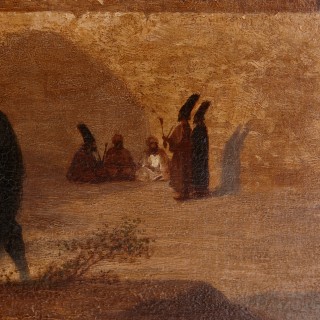 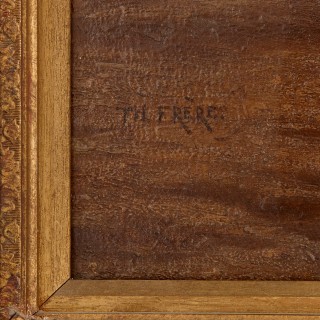 This exceptional painting depicts the Tomb of Esther and Mordechai with the Alvand subrange of the Zagros Mountains behind. This monument is located in Hamadan, Iran.

The painting was created by the important 19th-Century artist, Charles-Théodore Frère (French, 1814-1888) for one John Wright-Osmaston (English, 1831-1901). Since Frère had never been to Iran, he based this painting on sketches and descriptions of the site found in a book written by Osmaston, titled ‘Old Ali’ or ‘Travels Long Ago’. This text recorded Osmaston’s travels across Scandinavia, Russia and the Middle East in 1860-61. The journey took eight months to complete and covered 11,000 miles.

There are clear parallels between details in Frère’s painting and passages in Osmaston’s text. For instance, Osmaston describes how ‘just as the sun rose, a splendid view was opened up to us […] It was exceedingly beautiful […] the mountains looking very remarkable in their icy covering, being curiously divided into an exact half by the snow-line; the upper half, in its mantle of white, the very picture of cold; the lower half, in its mantle of brown, hot-looking tawny, and bare.’ The Alvand range is depicted in just this way, with the brown mountains before the tall snowy peaks. In his account of visiting the Tomb of Esther and Mordecai, Osmaston also describes ‘A tall, old Israelite, with a long, white beard that had seen seventy summers at least…[who] led us in through a low doorway’ to the ‘two wooden sarcophagi, one in memory of Esther, the other of Mordecai’. Similarly, in this painting, a grey bearded man gazes out at the beholder and gestures to the tomb, as though inviting us to enter.

By employing short, blended brushstrokes, Charles-Théodore Frère has managed to portray the scene in exceptional detail. The figures, horses, architecture and landscape are highly naturalistic in their depiction. Frère has also captured the beautiful warm rays of light, as they fall across the scene. Frère was an exceptionally talented artist, as demonstrated in this painting and in the fact that his work is today held in the Metropolitan Museum of Art in New York, the Heritage Museum in St. Petersburg, and many other prestigious international art galleries. This work is signed ‘Th Frere’ in the lower left corner.

The canvas is displayed in a giltwood frame, which is beautifully carved with cartouches, flower trails, and scrolled acanthus leaves.