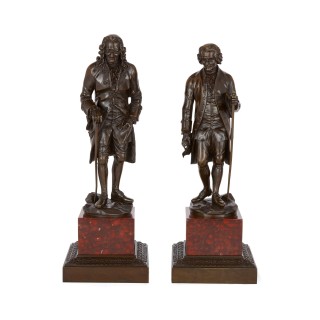 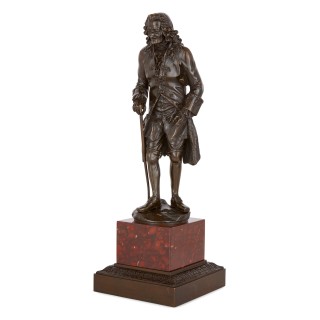 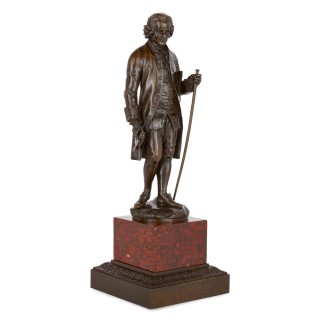 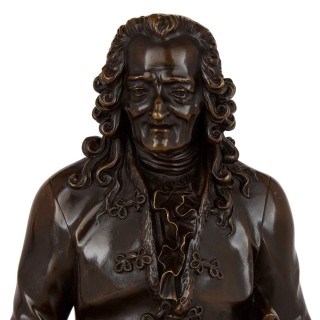 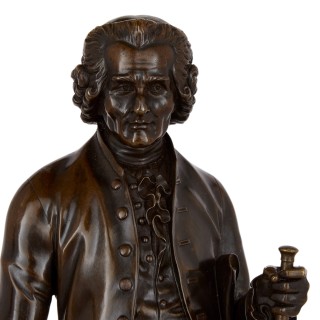 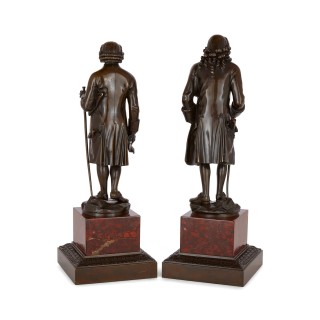 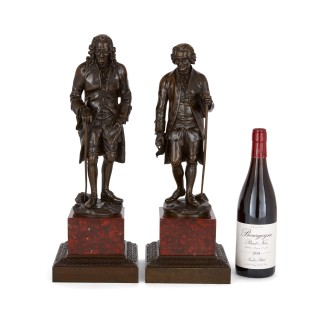 Pair of French patinated-bronze sculptures of Voltaire and Rousseau

These excellent sculptures depict the Enlightenment philosophers Voltaire and Rousseau, and are made in the model of works by Jean-Claude-Francois Joseph Rosset (French, 1706-1786). Rousseau, the philosopher of course famous for this discourses on inequality and social justice and similar areas, is shown standing with a scroll in his right hand and a cane in his left, wearing a shirt with frills, waistcoat and frock coat. Voltaire, the great defender of tolerance, freedom of speech, freedom of religion and other civil liberties, is depicted similarly dressed to Rousseau, with his left hand tucked in his pocket, his right holding a cane, and wearing a shoulder-length wig.

Rosset, after whom these works are made, was a famous sculptor active in the 18th century, and who worked with his sons, Jacques-Joseph Rosset and François-Marie Rosset. His sculptures of Rousseau and Voltaire, for example, are displayed across the world in locations such as the Metropolitan Museum of Art in New York, the National Museum in Stockholm, and The Walters Art Museum in Baltimore, Maryland. These excellent sculptures depict these towering historical figures with great vitality and skill. They are mounted on naturalistic circular bases, red marble square pedestals, and acanthus-cast plinths.

Pair of French patinated-bronze sculptures of Voltaire and Rousseau