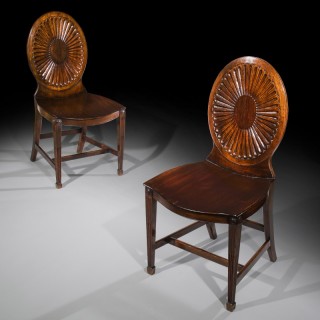 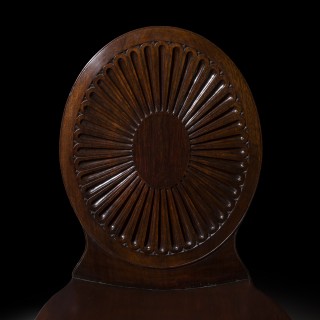 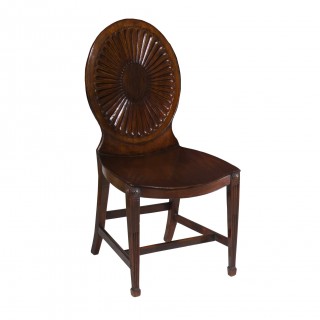 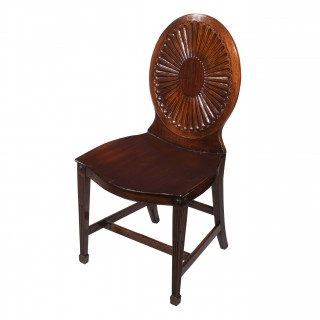 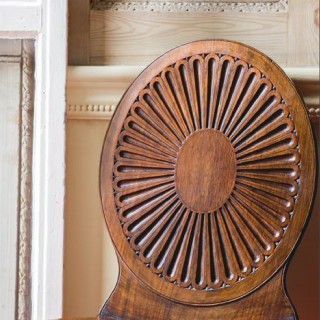 Pair of English George III mahogany Hall Chairs, in the manner of Mayhew and Ince,
Circa 1775.

Each with a carved oval fan back centered by a vacant medallion, above a solid serpentine-shaped saddle seat and seatrail, raised on roundel-headed square tapering and stop-fluted legs joined by an H-stretcher, back seatrails stamped with ‘SO’.

With their distinctive medallion-shaped fluted backs, the present hall chairs are designed in the George III ‘Roman’ fashion, introduced in the 1770’s and promoted by Robert Adam, James Wyatt, and other fashionable designers of the day. This design is found on a set of armorial chairs dating from the 1770’s and attributed to the leading London firm of Mayhew and Ince, sold Christie’s, 21 June 2004, lot 54.

Another related pair of hall chairs attributed to Mayhew and Ince, was almost certainly commissioned by George Brodrick, 4th Viscount Midleton (d. 1836) for Peper Harow, Sussex. Hall chairs of identical design and probably from the same workshop were formerly at Coombe Warren, Kingston Hill, London. A slightly more elaborate version, formerly in the possession of The Drapers Company in London, was by repute designed by Robert Adam.