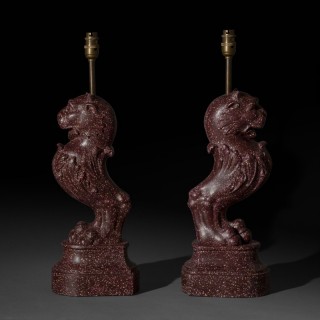 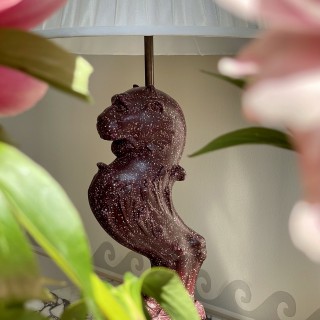 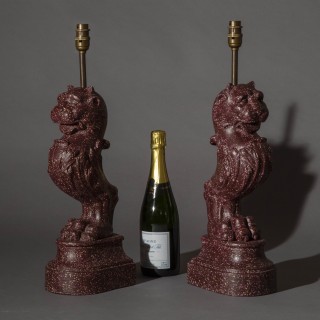 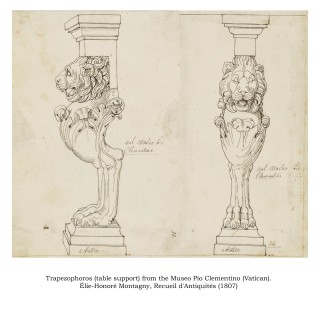 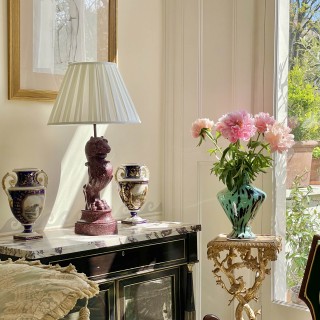 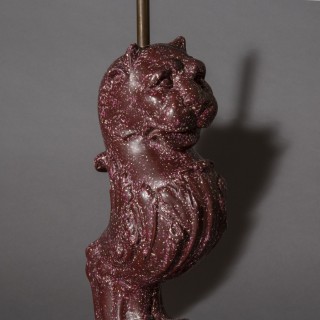 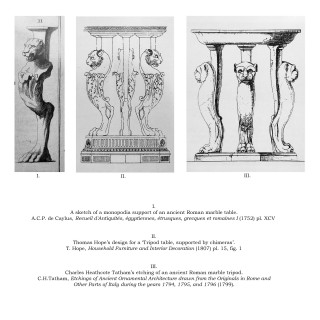 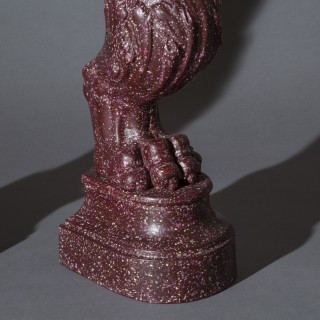 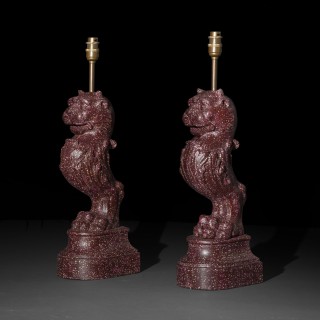 Why we like them
A rather unusual object; well-cast and of great heavy quality. We love their bold, flamboyant design, evoking the Grand Tour and Ancient Rome.

The painted decoration simulates ‘Imperial Porphyry’, It is highly prized for its rarity and noble ‘Imperial’ purple colour, a symbol of power. Imperial Porphyry comes from a 600 million-year-old volcanic rock from Gabal Abu Dukhan quarry in the Eastern Desert of Egypt which was discovered by Romans in AD 18. The stone which was extremely hard to quarry and carve was used by the Romans for making objects of dazzling luxury, such as thrones, sarcophagi, sculpture and etc.

The form of these lamps corresponds to a drawing by Élie‐Honoré Montagny (1782–1864). The drawing is a representation of an ancient marble trapezophoros or a table support, from the collection of the Museo Pio Clementino in Vatican. Montagny, a former pupil of Jacques‐Louis David, lived in Italy from 1804 to 1815 where he studied antiquities from collections in Rome and Naples.

A similar trapezophoros was illustrated in Comte de Caylus’s Recueil d’antiquités égyptiennes, étrusques, grecques et romaines, I (1752), pl. XCV, no. II, p. 259. Such supports were often used on tripods in Ancient Rome, as shown in Charles Heathcote Tatham’s etching of an ancient Roman marble tripod from the Vatican collection, published in his Etchings, representing the best examples of ancient ornamental architecture; drawn from the originals in Rome, and other parts of Italy, during the years 1794, 1795 and 1796 (1799). A related design for a ‘tripod table supported by chimaeras’ by Thomas Hope is published his in Household Furniture and Interior Decoration. (1807). A pair of tables made to this design are now at the Victoria and Albert Museum, London.