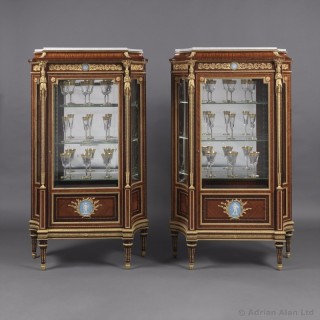 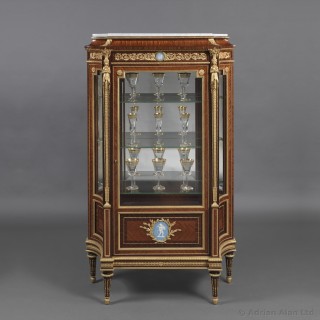 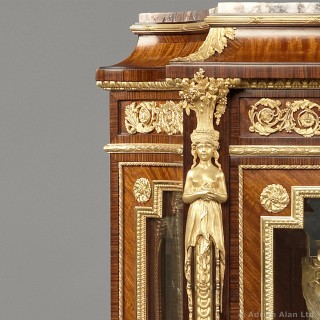 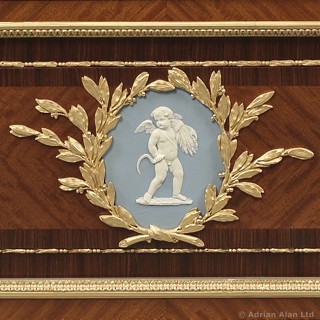 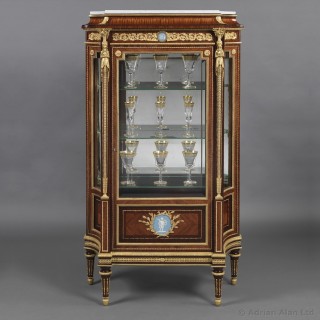 This rare pair of vitrines, each have a shaped Carrera marble top above a frieze centred by a round classical Jasperware plaque flanked by gilt-bronze putti figures and scrolling acanthus running pattern. Below is a gilt-bronze framed bevelled glass door above a panel centred by a finely modelled Jasperware plaque of a putto representing the seasons. The door is flanked to either side by gilt-bronze monnaie pattern and headed by a pair of exceptionally fine female canephor figures. The shaped sides have corresponding bevelled glass panels and the vitrine is raised on tapering fluted legs.

The distinctive canephor figures, finely cast as female caryatids with ringlets in their hair and supporting baskets of fruit upon their heads, is a distinctive and celebrated model unique to Zwiener. Many of Zwieners bronzes are executed in the Louis XV style, with flowers and scrolling acanthus leaves and an emphasis on asymmetry, typical of the work of his bronze sculptor Léon Messagé. The mounts employed on this rare pair of vitrines however sees Zwiener creating his own up-to-date reinterpretation of the Louis XVI style, drawing inspiration from established Louis XVI models such as those designed by Weisweiller for Marie-Antoinette’s Dressing table. [See Mestdagh, p.305].

A second distinctive feature of the vitrines is the finely modelled Wedgwood Jasperware plaques incorporated in the frieze of each vitrine and beneath the doors. Wedgwood exhibited at nearly all of the Universal Exhibitions held in 19th century France, displaying amongst other pieces, plaques specifically intended to be mounted on to furniture. The first vitrine displays to the frieze a finely modelled plaque in the classical style, depicting a group of putti at play, one being pushed on a swing, while another plays a trumpet and a small attentive dog watches from below. Beneath the glass panelled door a larger Jasperware plaque is incorporated depicting a putto figure with a garland of flowers, emblematic of spring.

The second vitrine has a classical plaque to the frieze depicting the ‘Dipping of Achilles’. A baby Achilles is held by an ankle by his mother Thetis who holds a flaming torch, above a large urn representing the river Styx. To the right Achilles’ father Peleus kneels towards the urn with a torch over each shoulder. A ram’s skull is hung on the trunk of the young tree to the left of the trio. Below the door is a large plaque depicting a putto with a sickle and wheat sheaf, emblematic of summer.

Zwieners pieces were acquired by many of the leading collectors of the nineteenth century. In particular he supplied his interpretation of the famous Bureau de Roi to Ludwig II at Herrenchiemsee, which was placed in the King’s study in 1884.