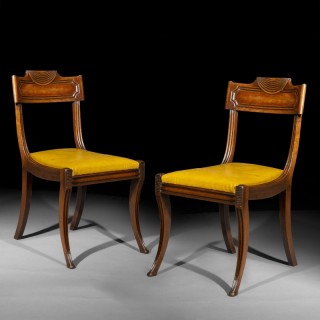 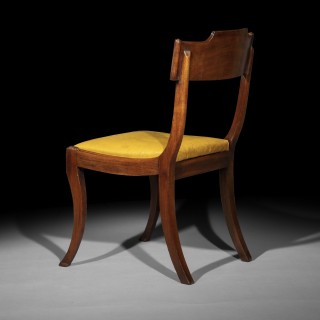 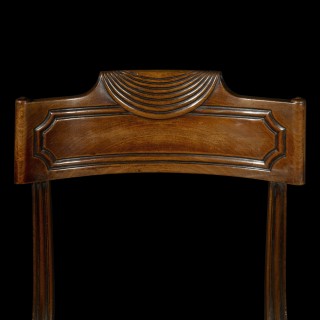 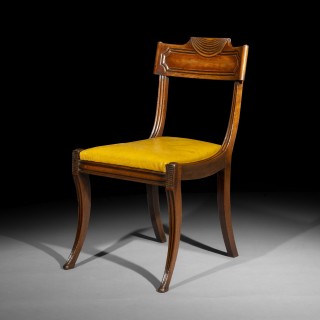 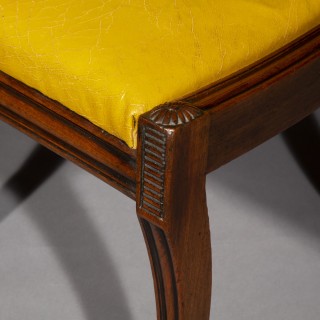 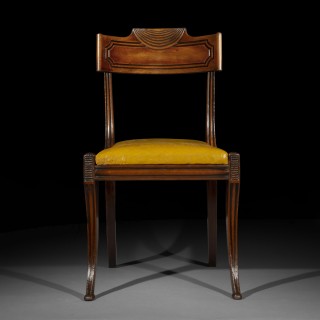 Pair of Regency Klismos Chairs, manner of Marsh and Tatham

A rare and unusual pair of mahogany ‘Klismos’ chairs of the early Regency period, in the manner of Marsh and Tatham (two pairs available)
England, circa 1810.

Why we like them
This model is one of the most elegant Regency chairs that we have handled. Their bold spread of the front legs, the deep rake of the backs is smartly balanced by the delicate thinness and refinement of the lines. We particularly like the swagged backs and the old worn yellow leather seats. A very chic addition to an eclectic or modern interior.

With their distinctively scrolled and sunk-fluted legs, terminating in subtle feet, the present chairs relate closely to a suite of dining-chairs from Brabourne Manor, Kent bearing the brand of B. Harmer, who worked as a journeyman for Elward, Marsh and Tatham (see C. Gilbert, Pictorial Dictionary of Marked London Furniture 1700-1840, Leeds, 1996, p.33, fig.478 and the Powderham suite of seat furniture sold by Lord Courtenay, Christie’s, London, 5 July 1990, lots 50-51 and 5 December 1991, lots 222-223). They also relate to a hall chair, bearing a Talbot crest, sold anonymously, Christie’s, London, 16 September 1999, lot 9. The latter in turn relate to the hall seats supplied in 1802 by Elward, Marsh and Tatham, which are likely to have been intended for George, Prince of Wales’s Marine Pavilion at Brighton (M. Jourdain, Regency Furniture, London, 1965, p. 56, fig. 102).

Pair of Regency Klismos Chairs, manner of Marsh and Tatham