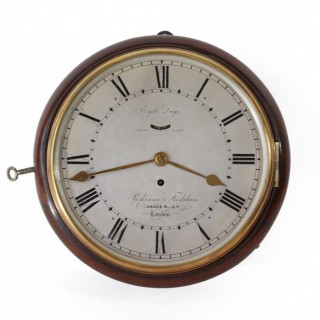 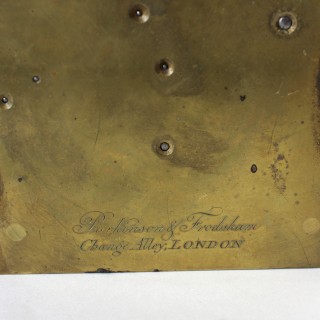 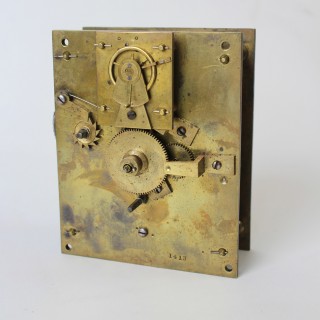 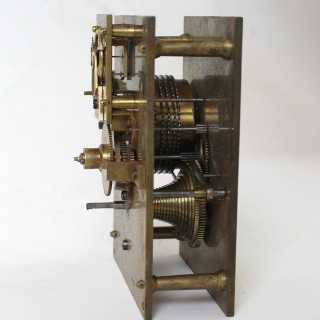 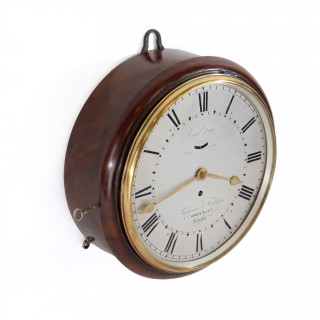 The 8-day fusee timepiece movement is similar in quality to the smallest fine library clocks that you see. All the components are beautifully delicately made. The clock has its original platform with large balance, as shown in the photos. The movement benefits from maintaining power. The movement plates are particularly substantial, with the backplate being engraved Parkinson & Frodsham, Change Alley, London. The front plate is numbered 1413.

The dial is fitted into the case by use of machine screws, which locate into the original brass fittings inset into the mahogany surround.

The silvered 8-inch dial is finely engraved with respect to both numerals and the script with the makers name and address. The crescent-shaped regulation slot is positioned under the XII.

The dial is engraved to indicate its Eight Days duration.

The case structure is formed from two components – the solid mahogany surround taken from one piece of mahogany, and most unusually the drum section behind is turned from another solid section. The case has its original functioning lock.

The movement, dial and case are all original to each other.

This firm of chronometer, clock and watch makers was established in 1801 by William James Frodsham (1778-1850) and William Parkinson (died circa 1842). It traded from 4 Change Alley 1801-90, 16 Queen Victoria Street 1891-2, 35 Royal Exchange 1893-5, 15B Royal Exchange 1896-1905 and 5 Budge Row 1906-47. Initially the firm specialised in marine and pocket chronometers. It had an extensive export business, and supplied the Admiralty and numerous shipping companies. After the founders’ deaths the business was continued by Frodsham’s elder sons and grandson until 1912, when the name and business were sold to the foreman, William Harris. Harris and his son Geoffrey ran the business successfully until 1944 when the firm’s premises in Budge Row were bombed. Geoffrey Harris worked for a time from home, but Parkinson and Frodsham ceased trading in 1947.

Photographed here prior to servicing the movement, but to be overhauled and guaranteed for 3 years.