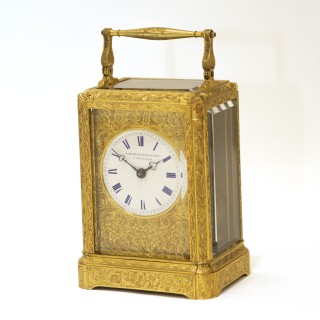 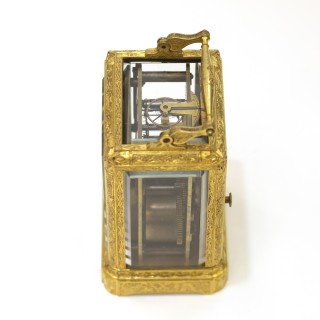 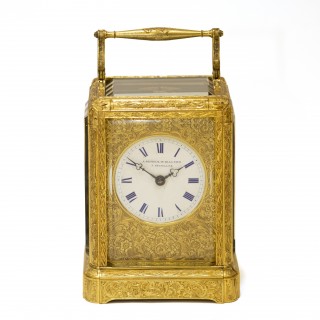 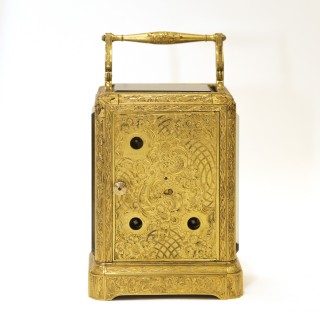 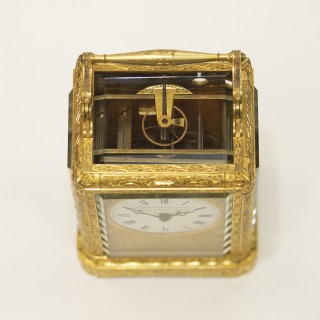 The one-piece caddy moulded case is typical of Garnier’s second series. Beautifully designed, the bevelled glasses fit within slots in the base-plate to keep the movement free of dust.  Both case and dial mask are profusely engarved with foliate scrolls. The hinged rear door is similarly engraved, with shuttered winding and hand setting holes.

The bell-striking movement has a two-plane ‘chaffcutter’ escapement regulated by a three-arm monometallic balance. This chaff cutter escapement was patented by designed by Garnier in 1829 and patented in 1830. The backplate is numbered 2054 behind the bell, a stamp repeated in the base of the case. The bell also half conceals the outside countwheel It is stamped to the frontplate of the movement with the Holingue Frères H.L. mark, Holingue being the supplier of the blancs roulant.

The movement is awaiting overhaul, once done, it will be guaranteeeed for 3 years.

Paul Garnier is recorded in CARRIAGE CLOCKS Their History and Development, by Allix and Bonnert as born 1801 and studying under Antide Janvier before setting up his own workshops in 1825. He was awarded silver medals in the Paris Exhibitions of 1827, 34, and 39; and gold medals in 1844 and 49. He worked from various addresses at Rue Taitbout, Paris and died in 1869 leaving the business to his son of the same name who was still exhibiting carriage clocks in the Paris Exhibition of 1889. In 1916 his son Paul bequeathed his excellent watch and clock collection to the Louvre.

Leigh Extence has written an article for the NAWCC [*], in which he examines an unsigned Garnier clock and attributes it to the maker through through various features. This Demeur clock has the same Garnier trademark arrow and style of font that Leigh identifies, and the case is similarly stamped with the serial number at the threshold of the back door.