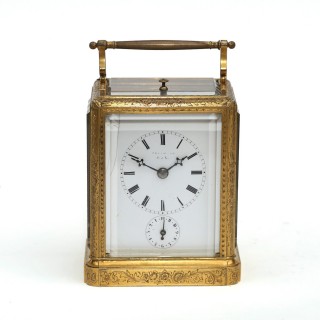 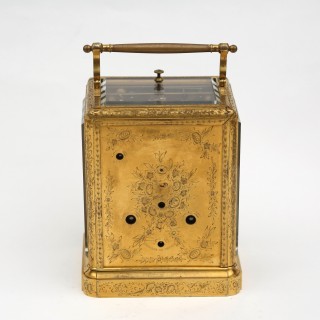 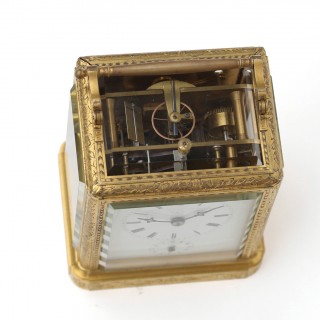 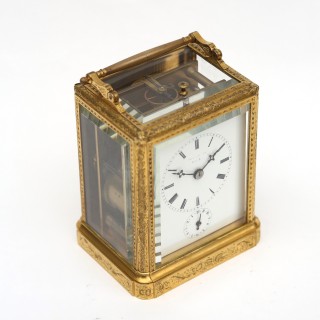 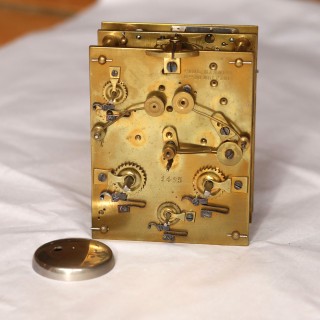 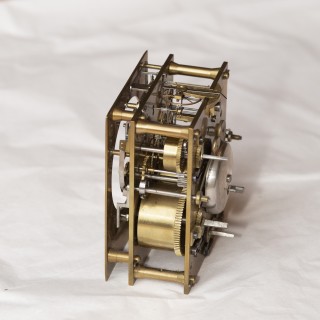 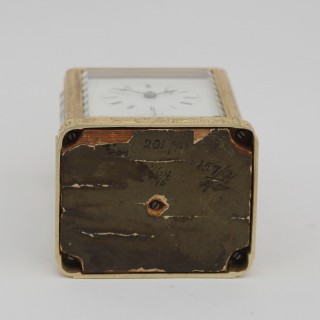 The mercury gilding is original and largely intact, apart from the handle which is fully rubbed. This clock is being presented in its fully original condition, unrestored with minor damage to the dial. This being a clock of some importance, there is an argument to leave case and dial unrestored, and simply to overhaul the movement. That decision is being left to the buyer. The dial will restore well, and the case can of course be regilded, this process just adding a few hundred pounds and a little time to the purchase.

All four original glasses are very thick and beveled, the top viewing glass is drilled and brass edged for the repeat button. The solid shuttered rear door is engraved all over with foliate scrolls and panels of lattice work, matching the base panel. The back lifts up to reveal the movement, but is designed to remain closed to protect the movement from dust. Indeed the side glasses all fit into recesses in the base as a precaution against dust, unlike later multi-piece cases.

The 8-day bell-striking movement has a two-plane ‘chaff cutter’ escapement regulated by a three-arm monometallic balance. This chaff cutter escapement was patented by Garnier in 1829 and patented in 1830. The backplate is signed PAUL GARNIER, HORLOGER DU ROI, PARIS and number 1425. This serial number is repeated on other case parts. The hand setting is effected through an aperture in the bell. The baseplate is mounted on a wooden block, with various repairers’ marks from over the years. It is working well now, but priced to include a full overhaul and guarantee.

Paul Garnier is recorded in CARRIAGE CLOCKS Their History and Development, by Allix and Bonnert as born 1801 and studying under Antide Janvier before setting up his own workshops in 1825. He was awarded silver medals in the Paris Exhibitions of 1827, 34, and 39 and gold medals in 1844 and 49. He worked from various addresses at Rue Taitbout, Paris and died in 1869 leaving the business to his son of the same name who was still exhibiting carriage clocks in the Paris Exhibition of 1889. In 1916 his son Paul bequeathed his excellent watch and clock collection to the Louvre.

To be overhauled and guaranteed for 3 years. Both case and dial can also be fully restored as discussed above.