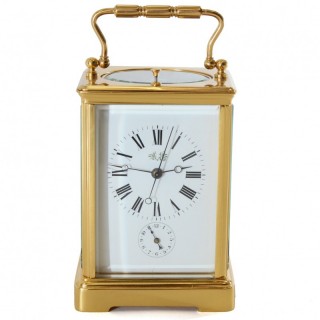 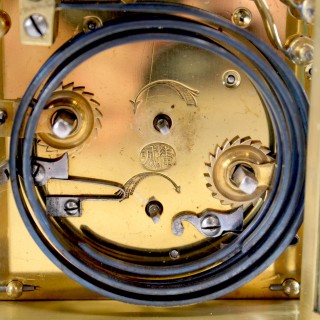 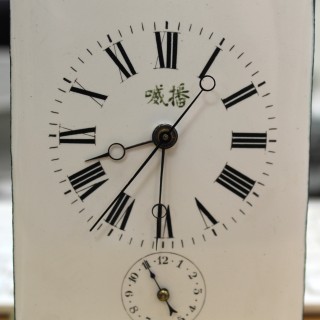 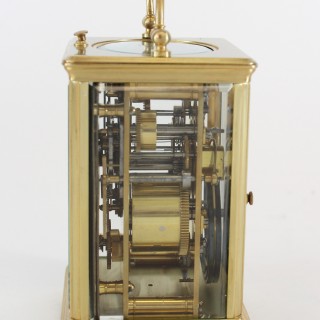 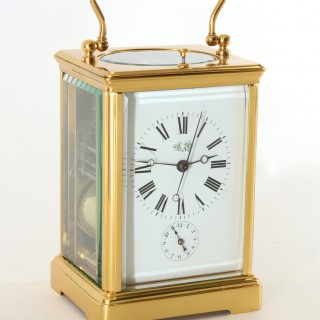 A very rare piece, this is an original Bovet Frères carriage clock from c.1900 with centre seconds and petite sonnerie striking, alarm and repeat functions, and is unusually signed with the Chinese trademark for Bovet.

The 8 day movement has the original silvered lever platform escapement. The backplate is stamped with a Chinese cartouche depicting the same characters as the dial. This is “bo wei”, being the Chinese name for Bovet. The gong block is stamped FRANCE, and holds 2 gongs; the petite sonnerie strike pattern is on two gongs on the quarters, and the hours strikes on one gong. The alarm sounds only on the higher-toned gong. Depressing the button on top of the case will repeat the last hour sounded.

The corniche-style case is in mint condition, having been regilded. Beveled glasses to all sides, and the oval top glass are also perfect.

Similarly, the white enamel dial is in perfect original condition, signed to the centre. The time dial has Roman numerals, the alarm dial below with Arabic numerals.

Height to the top of the carrying handle is 6½ inches.

The three Bovet brothers, Bovet Frères, Frederick (born 1786), Alphonse (born 1788) and Edouard (born 1797) had worked alongside their father, the watchmaker Jean-Frédéric Bovet in Fleurier, Switzerland, where they were contemporaries of their cousin, the well-known horologist George-Alfred Vaucher. In 1812 they left the area and moved to London where they worked with Ilbery & Magniac, both of whom saw the potential in the emerging Chinese market, and in 1818 sent Edouard to Canton to establish a business selling watches there. In 1822, Edouard himself having sold a number of his own watches for good money in Canton, returned to London to set up business alongside his brothers with the sole intention of making the most of this Chinese love of Western horological pieces.
Edouard concentrated on the Canton side of the business, whilst the two brothers remained in London arranging the shipments outward. A fourth brother, Gustave, was charged with running the manufacturing side of the business back in their home-town of Fleurier. They set up workshops in Canton in 1830 but this operation proved too large and expensive, especially with the troubles brought by the Opium Wars which were raging at this time, and a smaller operation was set up in Macau.
By 1855 the watch market in China effectively crashed overnight with the Opium Wars still causing problems for the various companies trying to trade in the country. This, allied with competition from the American and German watch companies who were able to produce and sell cheaper watches, and, by this date, the death of the three brothers, meant that in 1864 the company, now possibly being run by their nephew Louis Bovet, sold their interest to another Fleurier business run by Jules Jequier and Ernest Bobillier, who were soon joined by Ami Leuba. Although this effectively ended the family’s connection, the name continued in various ways until the 1960s, being run for a short period in the mid-20th century by descendants of the Bovet family.
Although a number of fine clocks are known by Bovet Frères, their main production was in watches of superb quality, which were often sold in pairs as was the custom in China at that time; the Chinese liked to have symmetry, especially when hanging the watches on a wall, with the desire to show both front and back. According to Eugène Jaquet and Alfred Chapuis, writing in the ‘The Technique and History of the Swiss Watch’ published in 1953, many of the watches sold by Bovet Frères were very English in their design and execution; indeed Chapuis, writing in ‘The Montre Chinoise‘ goes as far as to suggest that many signed as made in Fleurier were in fact made in England.

The popularity of Bovet watches in China in the mid 19th century meant that bo wei became a common noun there for watches for many years.

We have not yet overhauled the movement, but once done, the clock will be guaranteed for 3 years.