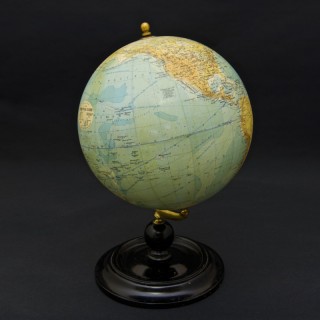 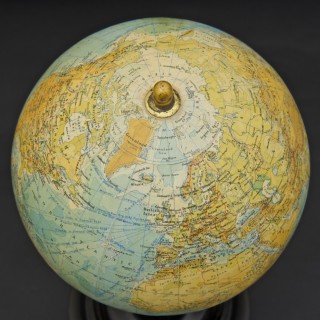 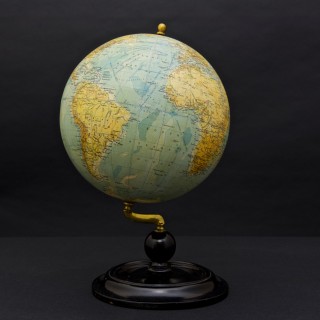 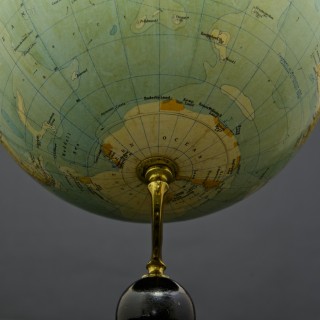 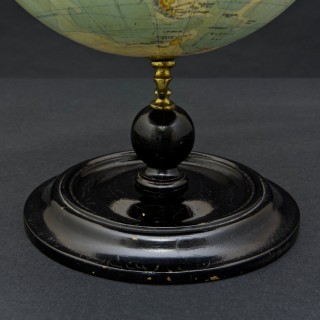 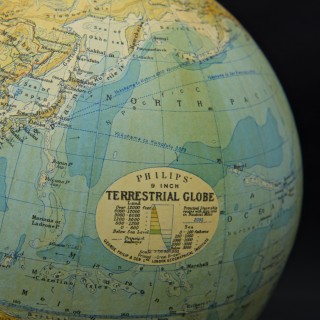 An attractive terrestrial globe by George Philip and Son; circa 1925. Printed in several colours and presented on a brass inclined plain mount attached to original turned ebonized wooden base and upright, with axis secured at the top by a brass acorn finial. The globe comprises of twelve coated lithographic paper gores with polar calottes over a nine inch card sphere. The age of the globe has been identified by the political borders and named cities displayed: Persia, Belgian Congo, Peking, Constantinople, and Petrograd are all visible. The globe is nicely detailed and has a grid network of parallels and meridians. It shows all the continents and countries as they were at the time it was printed and also indicates all the principal steamship routes with distances in nautical miles. A cartouche is present that includes the title, maker’s address, the scale (1:56,000,000) and the colouring scheme.
George Philip, (1800–1882) was a cartographer and map publisher. He founded George Philip & Sons in 1834 in Liverpool primarily as a bookseller and stationer, but rapidly expanding to become a publisher of primarily maps, atlases and educational works. He had one son, also George (1823–1902), who was admitted to the business in 1848.
George senior was born in Huntly, Aberdeenshire and by 1819 he had become assistant to the Liverpool bookseller, William Grapel before going on to start his own business. He used cartographers (such as John Bartholomew the elder, August Petermann, and William Hughes) to produce maps on copper plates. Philip then had these printed and hand-coloured by his women tinters. The business expanded rapidly and by the time he produced his county maps of 1862 he was using machine coloured maps produced on power-driven lithographic presses.
Philips’ production of globes in the 19th century was mainly limited to associations with other British globe makers, including Smith & Sons, London, but in 1902 Philip ventured into the production of globes as a manufacturer, facilitated by the firm’s establishment of the London Geographical Institute, a large factory for map, atlas, and globe production. Globes from this era are generally constructed by forming a sphere made either of card or fibreboard covered by gesso (plaster) to ensure smoothness. The sphere was then overlaid with a map printed on long, thin elliptical strips of paper that narrow to a point at the North and South Poles.
Over the years, Philip acquired the production lines of other British globe makers including Malby, Betts, Smith and Johnston. The firm also supplied atlases and textbooks overseas starting with an atlas for Australian schools in 1865 and for New Zealand in 1869. The demand from board schools, established after 1870, enabled further expansion in the market for globes, atlases and wall maps.