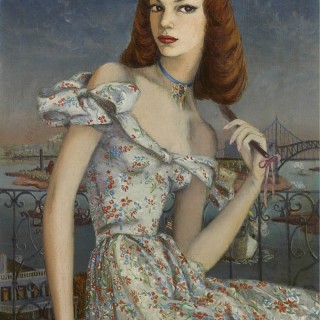 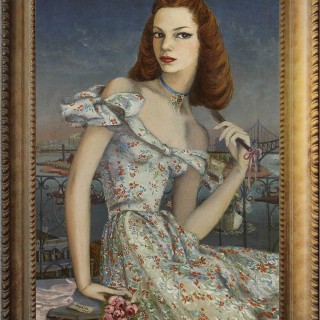 The Sitter is Lucille B Harris of Tuxedo Park, a New York society beauty, painted in 1944 on her sixteenth birthday whilst the War still raged. She ‘came out’ (socially not preferentially) at the Victory Cotillon & Ball, a victory party and benefit for the New York Infirmary. Held in December 1945 it launched 135 young New York debutantes on to the unsuspecting social scene. Either Lucile or mother (they had the same name) led the Ball Committee.

Lucille Jnr was born in May 1927, the daughter of George Upham Harris a well-known Stockbroker & the Publicity Director and a governor of the New York Stock Exchange. He retired as Chairman of Harris, Upham & Co., Inc. Her mother, also Lucille, was the daughter of LeRoy Baldwin, President of the Empire Trust Company and a respected public benefactor at the time.

Lucille senior had been the victim of a notorious but rather ham-fisted blackmail plot in 1935. A gang of half-wits mocked up a photograph of her, supposedly standing naked next to a man in a similar state. Effectively an early attempt at photoshopping, pasting her head on to another body none too convincingly. The crooks were easily caught in a police sting and the ensuing trial made great tabloid reading. It was a testament to the Baldwin-Harris standing that the gang had only targeted one other victim, Doris Duke the ‘Lucky Strike’ tobacco heiress, known at the time as ‘the world’s richest girl’.

Despite her obvious wealth, Lucille Jr seems to have embarked on a career as a fashion model. In 1947 she was photographed in a wedding dress by the great Irving Penn – I’m still uncertain in what capacity – bride or model – as this was the year that she married Amory Carhart Jr.

She appeared frequently in the fashion press; the most striking image, taken by John Rawlings, appeared in Vogue in 1954. Lucille stands staring directly at the camera, a young man loads her Louis Vuitton cases into a sea plane behind her as the New York skyline rises majestically beyond. An iconic image of the period.

Her daughter Wendy was born in 1948. A son Amory Sibley Carhart III followed in 1951.

Lucile, the model, sadly died a young 63, predeceasing her husband Amory jr by 12 years in 1990, even though eight years his junior. Amory Jr followed in 2002, dying intriguingly in Ho Chi Minh City, Vietnam. His online obituary reads ‘A gentleman who thoroughly enjoyed life’. I’m guessing the obituaries in America use a different euphemistic code to the Daily Telegraph.

They are survived by their grandson Amory S. Carhart (according to the internet the third, but I make it IV, in fact if tracking back, actually V)

Sad that such a stunning period portrait, painted by a fascinating, internationally renowned artist, should find its way out of a family collection. A depiction of wealth and privilege, a portrait of a beautiful young woman coming of age in the most exciting city of the most powerful nation on earth in the middle of a world war.

Karin was born Elisabeth Kluth in Charlottenburg not far from Berlin. She entered the Cologne Art School where she studied under the Dutch arts and crafts artist Johan Thorn Prikker (1868-1932) and the German Expressionist Richard Seewald (1889–1976). In 1927 she visited Ascona in Switzerland on a school trip. At the end she refused to return to Cologne, instead selling her belongings in order to be able to stay. At this point, one source relates, she made her first sale, to Friedrich August, Freiherr von der Heydte. Heydte, at this time an aristocratic academic, was later to win fame as a paratrooper general and post war was to be a key player in the 1962 Spiegel scandal in West Germany.

While in Ascona Karin met the Dutch artist Ernst Leyden, fourteen years her senior. Anecdotally, family legend has it that it was love at first sight. ‘Ernst was handsome, newly returned from the Orient and already making a name for himself as a talented artist. He was painting on a bridge when the beautiful young Karin stopped to admire his work.’ (http://allaboutart.nl/) The lovers travelled to Egypt, Syria, Lebanon and finally Italy where she studied Fresco Techniques at the Florence Academy under professor Chigi.

She began painting, participating in a Group exhibit in Cologne in 1928. There her work was noticed by Der Querschnitt, the Berlin magazine of art and culture, which published an illustrated article of a painting acquired by the Cologne Museum.

For a few years, Karin and Ernst spent a charmed existence dividing their time between the edge of the Loosdrecht lakes near Amsterdam and Paris. Through Ernst’s connections their wide circle of friends in Paris included his old friend Piet Mondrian and the beau monde of artistic society. A society that included Marc Chagall, Jules Pascin, Tsoguharu Foujita, Ossip Zadkine, Giorgio de Chirico, Francis Picabia and of course Man Ray. In 1929 the latter took a celebrated portrait of Karin that appeared in the French press and ‘Town & Country’ Magazine in England.

In 1932 the couple married and Karin gave birth to a son, Ragnar, the same year. They spent three years in Sintra, Portugal before moving to Capri in 1936. This was the year that Karin received a commission for a series of large murals from Sir Thomas Stafford Bazley for Hatherop Castle. It launched her onto the British art scene, in 1937 she was exhibiting at The Leicester Galleries and elected, under the patronage of Augustus John, to the Royal Society of Wall Painters. As her international career took off, the Musée du Jeu de Paume, in Paris purchased one of her oils and in 1938 Karin travelled unaccompanied to New York to organise her first one-man show at the Marie Sterner Galleries.

The Leydens had barely returned home to Loosdrecht when the Second World War broke out and they emigrated to America. They set up their workshop in New York and then in Nyack, by January 1941 they were opening a joint exhibition at the Georges Wildenstein Gallery in New York. The same year the ‘van’ appeared for the first time with ‘Leyden’ and Gloria Vanderbilt (Socialite and future Jeans Queen) was photographed with her newly commissioned Karin portrait.

1941 also saw the newly ‘Van’ Leydens take a long crossing of the States, culminating with their arrival and discovery of the West Coast. They decided to set up shop, buying a ranch in Brentwood, LA. To decorate their new Californian home the couple developed a process for covering simple plywood furniture and walls with painted glass tiles. This became a new medium for Karin’s art, which developed very successfully, to the point where stars like Tyrone Power and Rita Hayworth had their homes decorated with large Karin van Leyden murals as did the Beverley Hills Hotel. Full immersion into Hollywood society was guaranteed when Charlie Chaplin commissioned Karin to paint his wife and their first two children (they went on to have six more, children not portraits).

Still in 1941 and the expiration of their visas required crossing a United States border. Ernst had to borrow money from one of his wealthy patrons to take the family on an extended camping trip to Mexico. Sharing expenses with the architect Eric Mendelsohn they stopped off to see Frank Lloyd Wright, Max Ernst and Henry Miller on the way.

Mexico seems to have been a revelation for the young German immigrants. There Karin discovered Indian culture in Chiapas and forged strong bonds of friendship with José Clemente Orozco and Diego Rivera whose portrait she painted. In 1947 they rented a house in San Miguel de Allende in search of fresh inspiration. Rivero and Orozco guided them towards the Mayan culture and Aztec monuments, leaving a lasting ‘Cubist’ influence on her figurative work of this period. The Leydens made repeated trips into the depths of Mexico up until 1952.

Throughout the 1940s Karin developed an international reputation as a designer, creating furniture for interior architect Paul László and advertisements and creations for Kathleen Mary Quinlan cosmetics, Jovoy and Corday Perfumes and Harper’s Bazaar.

This led to increasingly regular trips to Paris and in 1947 Karin and Ernst were encouraged to return more permanently to a war-ravaged Europe. Their first priority was to track down their families – Ernst’s sister had survived a German concentration camp and Karin’s parents survived the allied bombing of Cologne. They acquired American citizenship in 1949.

The Leydens opened a Paris workshop, initially at the Rue des martyrs, then at Willy Maywald’s in Rue de la Grande-Chaumière and finally in the Rue de Seine. In 1957 the couple move definitively to Europe and divided their time between the Paris studio and a house in Venice. Karin continued to develop her Mexican inspired themes but now with Italian subjects.

Ernst grew weary of the noise and smells of the metropolitan life and decided to buy a derelict farmhouse outside Paris called l’Enclos sur Lieutel. Renovations proved extensive, taking three years to complete, during which time the couple live mainly in Venice and New York.

Once ensconced in the completed farmhouse, Karin found life there too isolated and she missed her Italian landscapes and the exuberant Italian lifestyle. Ernst, in contrast, found the tranquillity he had been searching for after the noisy distractions of Paris. Inevitably the couple parted after thirty years of life and creative collaboration. Karin moved to live with her sister in Lugano while still making regular trips to New York. She met Ernst only very occasionally through the 1960s, usually in America. In 1965 Ernst embarked on a long worldwide trip, taking in Teheran, Kabul, Phnom Penh, Bombay, Tokyo and Hawaii, absorbing the Buddhist and Zen culture into his work. He collapsed in 1969 and died a few months later in l’Enclos sur Lieutel.

Karin developed in a different direction, having flirted with abstraction in the 1950s she began working in collage in the mid-1960s. In later life she settled in Lugano to be near her sister, dying there in 1977.

“Fortunately, Karin van Leyden cares neither about the theories of others, nor about” isms “. All aspects of her work (drawings, watercolours, tempera and oils) reveal a unique personality. Her oils on canvas always evoke dreams from constant meditation. Her drawings, very complete, are more direct. Stripped of redundant details, Karin’s drawings express authentic realities with moving simplicity. With remarkable strength, it reveals not only the atmosphere of the place, but also the power of its characters. She invents and composes with harmony on a very large scale.”
He was presumably responsible for the Tate’s purchase of the portrait of Karin painted by Ernst in 1931.

“Karin van Leyden’s drawings have enormous charm and quality. But, as far as I’m concerned, their main attraction lies in the way in which their depths develop under my gaze. Her carnal figures are suspended in the emptiness of the paper. To see them like this is a real pleasure for me, which I wish to share with so many others. ”

‘Captured by Beauty’ a documentary film about the couple, was written and directed by Frederieke Jochems in 2016.

A biography of her life ‘Karin Van Leyden’ written by her sister Ursula Dietzsch-Kluth, was published in 2009.

Karin’s paintings are held in the permanent Museum collections of –