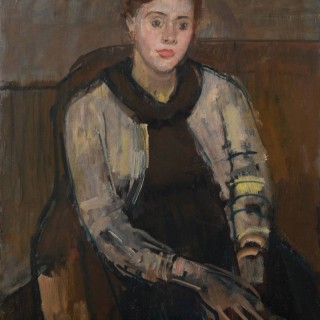 Original Oil on canvas by Modern British artist Ruskin Spear.
Spear has long been an artist beyond my pocket, a Modern British painter who has a loyal and determined fan base amongst collectors and dealers alike. I was delighted to find these two portraits tucked away in a country saleroom during the first lockdown for something of a steal. Both paintings portray Claire Stafford and therein lies a story. Spear had a long and presumably happy marriage to Mary who he remained with all his life. However in the mid-1950s he met the 16 year old Claire while she was working as an artists model. They began a long affair, including a daughter that Mary seems to have brought up as her own. What complicated lives people lead. Anyway Claire seems to have flourished, ending up as the Keep of Tigers at London Zoo.
Available at Panter and Hall.

An English painter of portraits and the picaresque, Spear was born in Hammersmith and remained there living and painting for most of his life. He studied at the Hammersmith School of Art and later at the Royal College of Art under Sir William Rothenstein from 1931 to 1934. He executed commissions for the War Artists’ Advisory Committee and took part in the ‘Recording Britain’ scheme sponsored by the Pilgrim Trust throughout the Second War. He was visiting teacher at the Central School of Art from 1945 to 1948 and at the Royal College of Art from 1948 until his death. He exhibited at the Royal Academy from 1932 and was elected full member in 1954. He was elected to the London Group in 1942, serving as President from 1949 to 1950. Public collections include the Tate Gallery, National Portrait Gallery, Imperial War Museum and the Royal Academy of Arts.

A retrospective of Spear’s work was held at the Royal Academy in 1980.