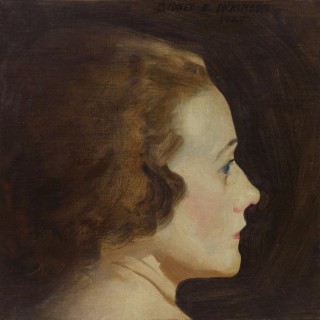 The Estate of Frank Mason (1921-2009), well known New York portrait and figure painter.
Dickinson was one of Frank Mason’s Teachers at the Arts Student’s League

Sidney Dickinson was born in Wallingford, Connecticut, the son of a Congregational minister, and raised in various places, including upstate New York, and Fargo, North Dakota. Interested in art at an early age, he studied at the Art Students League in New York City under William Merritt Chase and George Bridgman, and at the National Academy of Design with Douglas Volk. Known primarily as a figure and portrait painter, he exhibited widely, was the recipient of numerous awards and prizes and is represented in many museum and private collections. An enthusiastic practitioner of alla prima painting, Dickinson often completed a portrait in a sitting of three or four hours. As versatile as he was prolific, he painted some of the most interesting personalities of his time, including such fellow artists as his cousin Edwin Dickinson, Raphael Soyer, and the sculptor Robert Aitken. While Dickinson composed his portraits and figurative works directly in the studio, his working method for landscapes seems to have remained the traditional one of painting studies to serve as the basis for finished works.

He was elected a member of the American Academy of Arts and Letters in 1931.