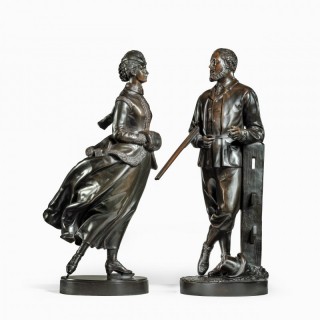 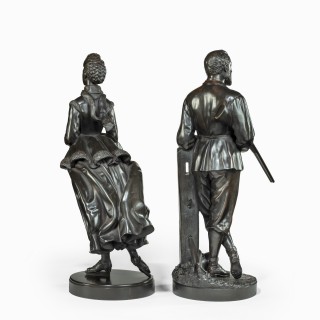 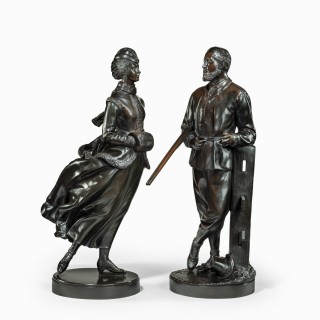 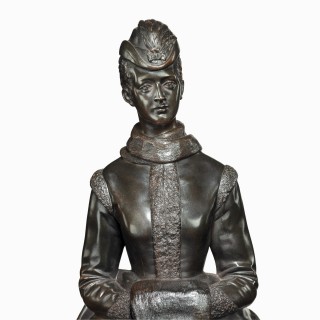 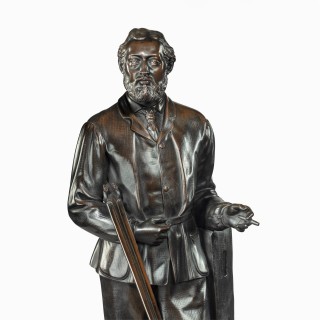 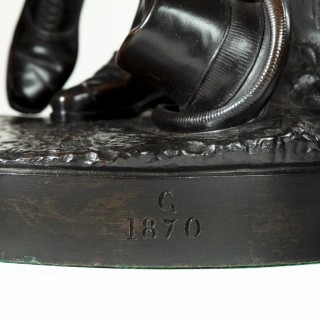 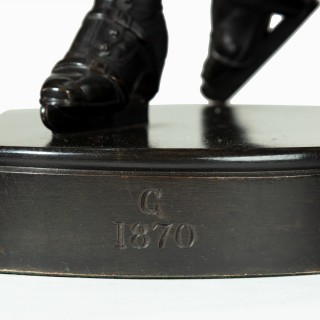 Prince Edward and Princess Alexandra of Wales by Count Gleichen

These bronze figures show Edward, Prince of Wales, standing in a nonchalant pose with one leg crossed over the other, a cigar in his left hand, his hat at his feet and a shotgun slung over his right arm. The elegant Princess of Wales is depicted skating, with feathers in her hat, and wearing a fur-trimmed coat and muff as the wind catches her three-quarter length skirt. Each stamped Elkington & Co Founders and G 1870. English, dated 1870.

Prince Victor of Hohenlohe-Langenburg, Count Gleichen, was the son of Prince Ernst of Hohenlohe-Langenburg and Princess Feodore of Leiningen, half-sister to Queen Victoria. He ran away from school to England in 1848 and was sponsored to enter the Royal Navy by Queen Victoria. In 1854 he attained the rank of Lieutenant after serving as mate on the flagship Cumberland, where his future brother-in-law was captain and his future father-in-law was admiral. In 1866 he retired from the navy and trained with the British sculptor William Theed. As a sculptor, he carried out several portrait commissions for Queen Victoria including a statuette of Prince Alfred, her second son, and another of Prince Albert Victor, Duke of Clarence and Prince George (the future George V) when cadets on Britannia and most probably these statuettes. There are numerous examples of his public works in marble displayed in prominent locations throughout Britain including; Alfred the Great, Mary Seacole, Queen Victoria, Benjamin Disraeli, Florence Nightingale and Thomas Holloway with his wife Jane, founder of Royal Holloway College. He was awarded a Knight Grand Cross of the Bath in 1867.

Prince Edward and Princess Alexandra of Wales by Count Gleichen