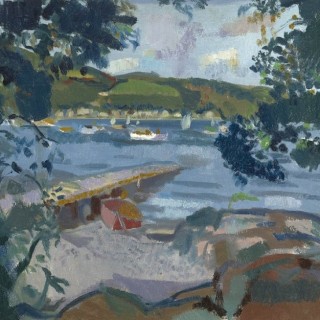 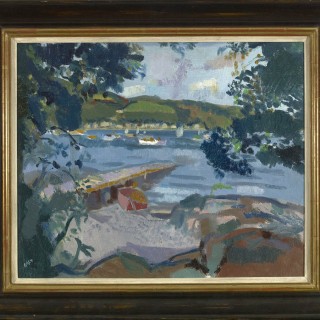 Original Oil painting on board by Modern Scottish artist Alexander Galt.
Available at Panter and Hall.

He was born in Greenock in 1913, the seventh child of a Clydeside brass founder. Living off the frugal earnings of his father’s labour he enrolled at the Glasgow School of Art in 1930. Several other students would tease him over his poverty and often he was forced to make his own paints and use his hair to make brushes. While at Glasgow he befriended David Donaldson and Bill Crosbie, both contemporaries at the school. Donaldson who later became Queen’s Limner in Scotland and Head of the School of Art wrote that he was overawed by Galt’s draughtsmanship “…he could draw like an angel….and …could out Orpen Orpen”. Many of the Glasgow art teachers referred to Galt as “the human camera”. On graduation he won the Torrance Award for life painting and his diploma work toured the art schools of Scotland as an example to other students.

In the 1930s he befriended the sculptor Jacob Epstein and his reputation began to grow apace. His painting ‘The Stable Boy’ was purchased by the Caird Museum bequest in Greenock and it was this work that drew the attention of the critic James Agate. Agate’s patronage proved invaluable to the young painter and led to introductions to Rex Nankivell at the Redfern Gallery and the patron Sir Ulrich Alexander, Keeper of the Privy Purse.

The award of the Carnegie Scholarship in 1938 enabled Galt to travel to Paris. He took rooms for two years in Montparnasse meeting the resident artistic community through his friend the padre Donald Caskie. Caskie later distinguished himself as the war hero ‘the Tartan Pimpernel’. Forced to return to Scotland with the onset of war he began to teach at Greenock high school before being called up for service in the RAF. Returning to civilian life in 1945 Galt took a job as part time tutor at Glasgow School of Art before being appointed as art master to Greenock high school. In the austerity of post war Glasgow Galt struggled to keep his family; it is an indication of the high esteem his fellow artists held him that when he felt obliged for economic reasons to resign from the Glasgow Arts Club the committee refused to allow him to leave, forgoing his membership fee.

Despite his popularity amongst his peers Galt was single minded in his pursuit of art. Although an elected member of the Royal Glasgow Institute he eschewed the accompanying social life, preferring to lose himself in his painting, the sound of opera reverberating around his studio. He was active until his death in 2000, winning his last prize at the RGI at the age of 81.