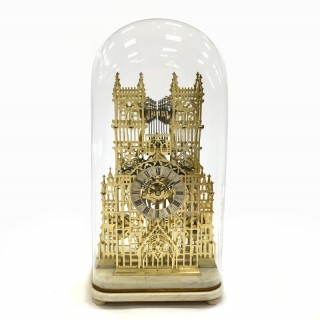 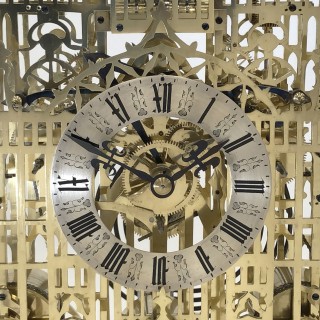 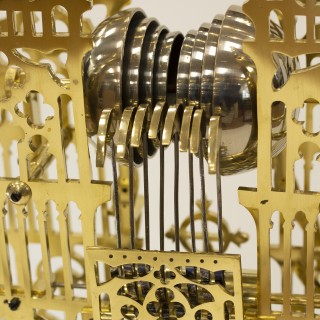 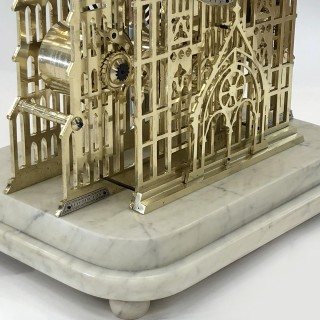 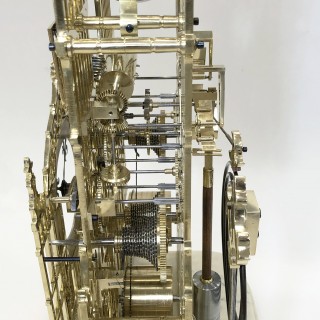 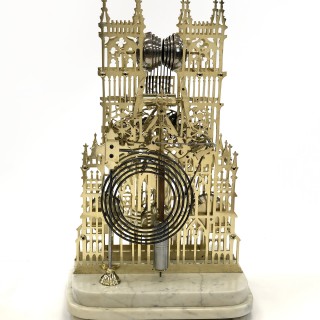 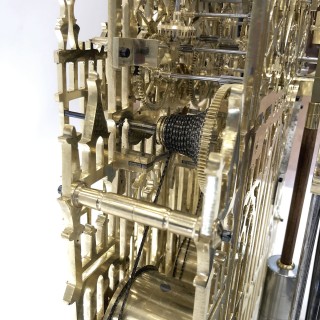 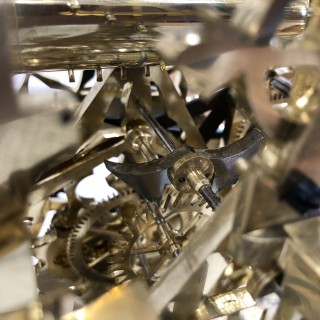 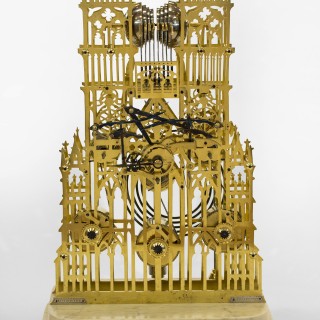 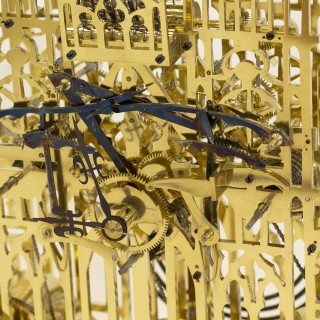 An imposing three train fusee skeleton clock by Evans of Handsworth from c.1870, based on the design of Westminster Abbey. The design is very three-dimensional, having four fretted brass frames; two contain the movement, a third supports the dial, and a fourth small frame is the entrance porch. The frames are beautifully fretted out, and carry silvered plaques for the retailer A Everington, Nottingham.

It is engineered to the highest standard as would be expected of one of Evans clocks, with all strike levers of blued steel, the wheelwork has six crossings. The three train fusee and chain movement has an anchor escapement with beautifully shaped pallets,  chiming on eight bells housed in the two towers and striking on a coiled gong.

The clock is mounted on a two-tier white carrera marble base raised on marble bun feet, under a square section glass dome.

Alfred Everington had a shop in Nottingham’s Victoria Street, and clearly sold several of this design of clock, with minor variations of the positioning of the bells and the style of dial.In this example, two tapered nests of bells are mounted between the twin towers, others are hidden within the towers or have one nest which runs front to back.

The Evans of Handsworth (West Midlands) factory produced many fine skeleton clocks including the Scott memorial and the York and Westminster Abbey models. William Frederick Evans (born 1819), joined John Houghton in his business The Soho Clock factory, and when Houghton retired in 1843 Evans took over the running of the business. He died in 1899 by which time his son, also William Frederick (born 1849), took control until his death in 1904.

The identical clock features on page 63 of Skeleton Clocks Britain 1800-1914, by Derek Roberts. Roberts states that these clocks are difficult to date as the design was made over a period of around thirty years, betwen 1855 and 1885.