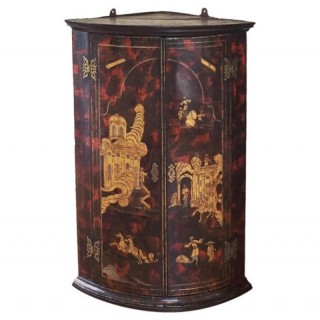 Queen Anne to George I Red and Black Chinoiserie Corner Cupboard, Circa 1710-1720. England

A very atmospheric and original Queen Anne to George I red and black japanned (to simulate tortoiseshell) chinoiserie corner cupboard.

To the exterior expressive scenes of leisure incorporate horse riding and an unusually high number of figures, eleven, each in traditional dress with silvered faces.

The interior consists of three shelves each beautifully shaped and decorated in original red japanning.

It should also be noted that that the japanned and chinoiserie decorated surfaces are in original country house condition and have only been lightly conserved to ensure the longevity of the piece. Similarly, the locks and skeleton key, fretwork hinges, chased escutcheons and internal door catches are all present and original.

As the demand for all things japanned grew, the Italian technique for imitating Asian lacquer-work also spread. The art of japanning developed in seventeenth-century Britain, France, Italy, and the Low Countries. The technique was described in manuals such as Stalker and Parker’s Treatise of Japanning and Varnishing, published in Oxford in 1688. Colonial Boston was a major center of the japanning trade in America, where at least a dozen cabinetmakers included it among their specialities.