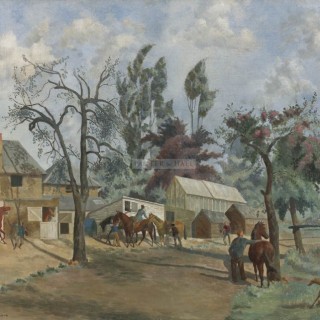 Born in Helensburgh into a distinguished family of painters, Mary studied at the Slade under Henry Tonks from 1919 to 1923, then under Maurice Greiffenhagen at Glasgow School of Art from 1923. From 1924-5, Paterson travelled to Paris where she entered the Académie de la Grand Chaumière under Lucien Simon and later studied at the atelier of André L’hote. During the war, she worked for the Admiralty at Oxford, then moved to Chelsea until 1955 when she returned to the family home on the west coast of Scotland.