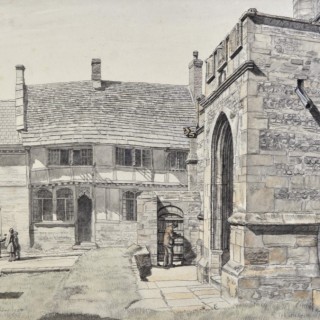 Schwabe and his family spent much of the summer of 1937 in Cerne Abbas, Dorset. He recording in his diary for Saturday 31 July: “Left for Cerne Abbas … We stay at the Pitch Market, facing the Church door in Abbey Street. It is a half-timbered house, with a little 15th century caring left on it, and two 15th century fireplaces. Mrs Jarrett runs it as a ‘guest-house’. They returned to London on 20th September.