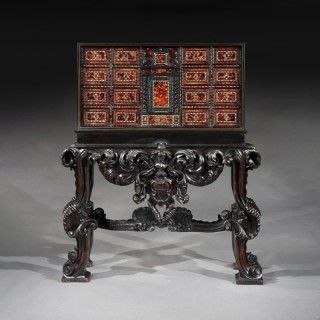 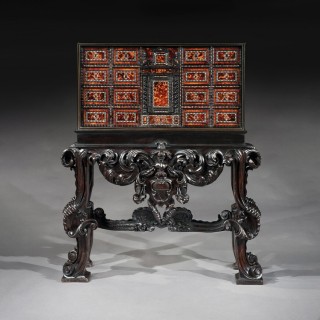 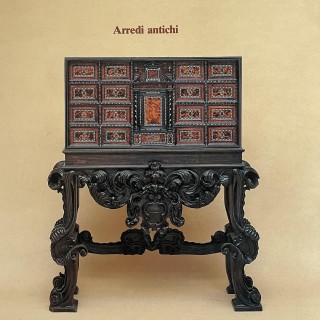 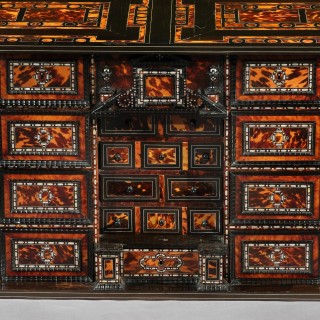 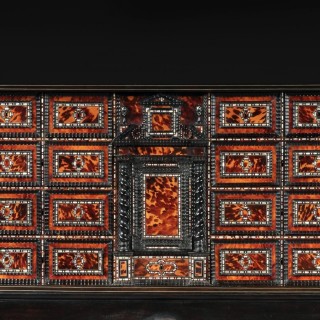 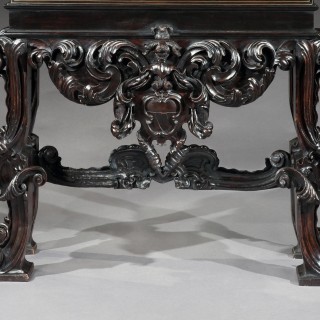 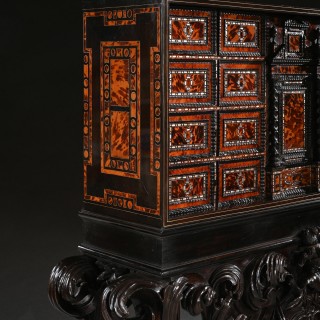 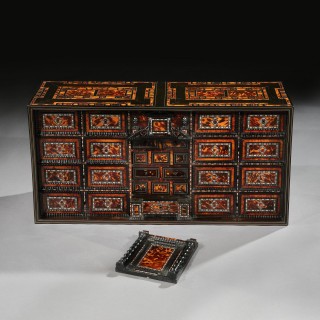 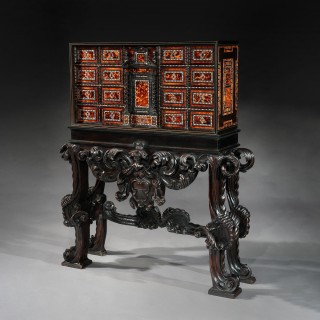 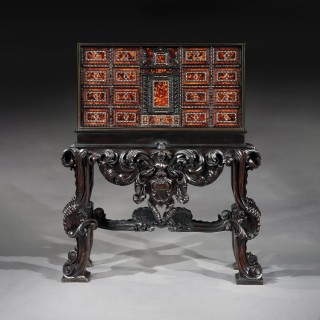 From the Perego Collection in Monza, an important 17th Century Italian architectural ebony and tortoiseshell cabinet inlayed with mother of pearl and pewter on a Baroque walnut base with the noble crest of the Caracciolo family.

Of architectural form, a fine ebony and tortoiseshell veneered Baroque cabinet with mother of pearl inlaid beading and pewter stringing, having a rarely seen geometrically banded top and sides conforming with the drawer fronts. Centred by a removable architectural panel with Solomonic columns, enclosing an arrangement of smaller drawers over an apron drawer and surmounted by a pediment drawer, flanked by two banks of ebony ripple moulded drawers of two smaller over three larger drawers to each side.
Raised on a richly carved Baroque walnut base with central plumed crest to be of the noble Caracciolo family on out-scrolled legs.
The base was a 17th century period Baroque console of the Caracciolo family that was cleverly adapted to house the cabinet.

Extremely rare to find, this cabinet also comes with provenance as once part of The Perego Collection, Monza retaining the original catalogue from 11 December 1986, Milano, where it was purchased with this cabinet illustrated on the front cover.

In an exceptionally well preserved original condition and of museum quality.
Retaining what looks to be the original key.

History of the Cabinet

Known as far back as the time of Tutankhamen, where various examples of cabinets where discovered in his tomb in 1922. The cabinet has been a symbol of wealth and education, and after many adaptions its use became widespread with Western culture from the early 16th Century.

This item of furnishing was connected to the birth of the ‘study’, a strictly private area of the typical Italian humanists residence where he could dedicate himself to his studies and cultural interests. However in the 17th Century the cabinet symbolised prosperity and success, along with intellect which therefore lead the cabinet to leave the confinements of the study and to be more a show piece, becoming one of the most important piece of furniture a nobleman could own.

Consequently the most prestigious artists of the time were called upon to create them using a rich source of materials, with the intention to create something true impressive and breathtaking.
It is in this context the search for the most rare and precious materials came about, towards the middle of the 17th Century the use of tortoiseshell become evident, where it became a distinctive trait of Neapolitan cabinets. Being a very prized material, creating an effect of great preciousness when polished, along side the mother of pearl both shining brightly against the ebony ground.