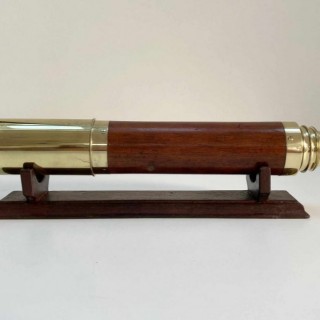 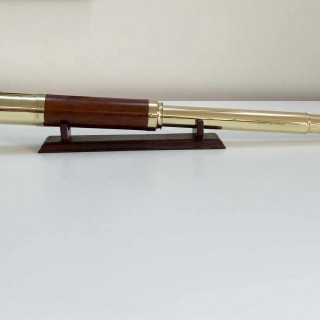 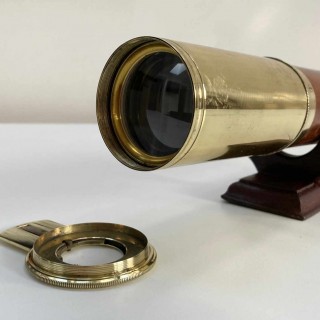 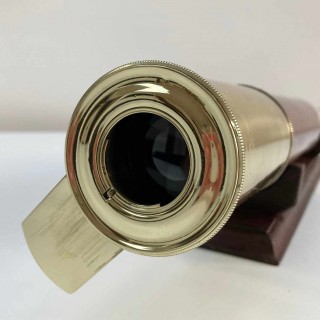 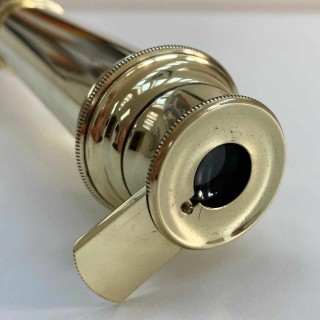 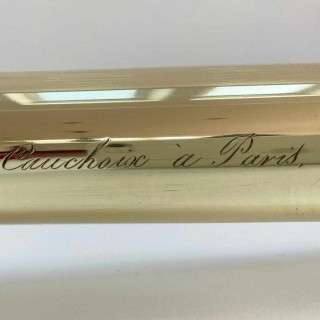 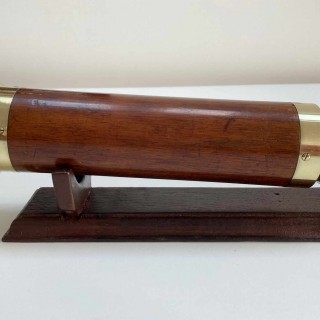 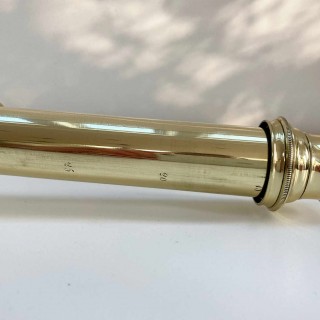 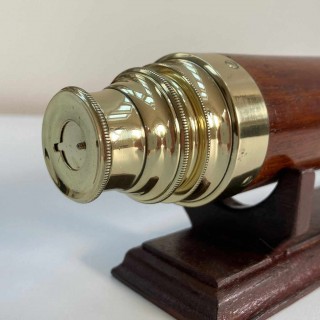 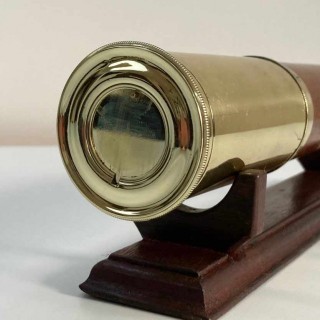 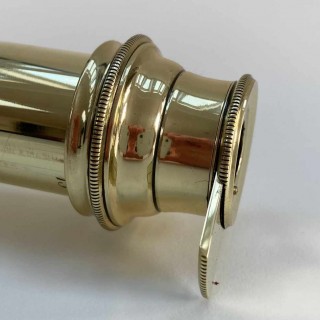 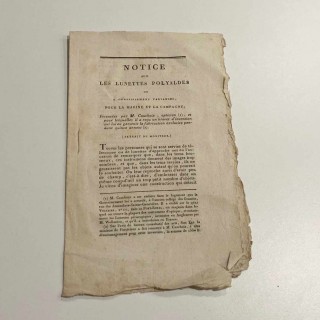 Comprised of a walnut barrel, the telescope extends to 66cms (or 72cms with the sunshade extended) and 32cms closed. The objective lens measures one inch in diameter with the lens cap in place or one and three quarter inches without.
The second draw is inscribed with the maker’s name “Cauchoix a Paris” and the first draw is engraved with a scale from 15 to 30.

Cauchoix developed this telescope in 1815 and it bears many similarities to David Brewster’s invention produced by William Harris in 1811 (see my website) although there is nothing to suggest that Cauchoix’s example involved any plagiarism.
Cauchoix released a pamphlet at the time to provide an introduction to his invention which is included in translation below. The original document is also included in the sale.

It would seem at first glance that it is seldom interesting to have a telescope which magnifies little, and that it would be better to dispose it immediately for the greatest magnification it can withstand; but if we remember that by sacrificing part of the magnification we increase the field of view and the clarity, we will see that this clarity can be precious in dark and hazy times, and that the range of the field can also become useful when it is only a question of perceiving all that exists in a space that one has an interest in recognizing. We can then and immediately examine the details better by increasing the magnification, if the weather is favorable. At nightfall, when you can barely see, the wide field and the large light spread through the telescope reduced to low magnification make it very easy to see and distinguish very poorly lit objects.

Deprived of the means to make these variations easily, the opticians chooses a median between the weakest and the strongest magnifications: this is why their instruments are too strong and too dark in foggy weather and too weak in calm weather. Also, they often oblige the owners to use multiple eyepieces in order to better adapt to the various states of the atmosphere. We thus have two, three or four eyepiece tubes for the same telescope, and as many different effects.

The new procedure which I have adopted has the advantage of offering all the intermediaries between the smallest and the strongest magnifications, one of which can double the other; that is to say that a polyalde telescope can magnify from 20 to 40 times, from 30 to 60, etc. This inexpensive method can be applied to all existing telescopes, even the most portable, provided they are good. It is even remarkable that its application to a telescope becomes a guarantee of its quality, for bad lenses do not support it. No lenses are added; all the effect is produced by the change of position of one or two lenses among the four which usually form the eyepiece system of a terrestrial or marine telescope. A movable tube inside, which one moves easily with the fingers, operates in an instant the change which one wishes. It takes less time for this operation than to take the point of focus: there is no part to remove or replace, everything is inside the telescope. If we want a telescope thus arranged to give two or three, or a greater number of known focal magnifications, no other care is needed in order to achieve this goal than that of making a few lines placed on the movable draw tube coincide with a fixed line, marked on the tube within which it sits. However, all these movements must be done starting from the point where the inner tube is positioned for the least magnification, that is to say when it is brought towards the eye until it stops. Thus, to go from a lower magnification to a higher one, it is necessary to push the draw tube towards the object: one can, by repeatedly pushing this tube, successively increase the force of the telescope; but, to return from a stronger magnification to a lower one, it is first necessary to bring the same tube back to the nearest point to the eye, and then to push it to the position it must occupy to give the desired magnification. It is also necessary for each magnification to take the point of focus; it is with this maneouver, that all the skill necessary to enjoy this process is reduced, the results of which can be so multiplied.

This invention makes it possible to use a telescope to a degree that we never dared with fixed magnifications as the eyepiece apparatus would have been more cumbersome than useful, and the expense quite unnecessary. Here, the weak and medium magnifications are readily at the disposal of the observer and the strongest which is used very rarely, is however also favourably achieved without expense. Thus, in a telescope twenty inches long and sixteen lines (3.6cms) in diameter, one ordinarily employs a magnification of 18 to 20 times, and one does not go beyond 25. A polyalde telescope of this size can offer magnifications from 15 to 30 times. This equals the force which is ordinarily given to telescopes three feet long and twenty-five lines (5.6cms) in diameter. The difference in these diameters makes the sixteen-line (3.6cms) telescope darker, it is agreed that in order to be able to use an equal magnification in the telescope of smaller diameter, the object which is observed must be very bright.
A final advantage could still be added to the telescope with respect to the ease of focussing. In ordinary practice, there is no other way than to slide the tubes into each other. This process works well as long as they keep their polish; but as soon as they begin to change, they no longer slide except by jerks; it becomes quite difficult to take the point with precision.

I succeeded in removing this inconvenience; one of the bezel tubes is shaped on the outside from fine, triple-threaded screws. The rotation gives an easy and smooth way to take the point with the greatest precision. We first adjust roughly by pulling the draws as usual, well by turning the one that contains the eyepieces, we apply the same movement to the screw pipe. The lengthening or shortening of the frame is thus slowly operated, which is necessary to arrive at the point of focus. This very simple mechanism gives telescopes, without increasing their size, the advantage of movements which had heretofore been reserved for instruments on stands.
Several persons, who enjoy great esteem in the sciences and in the navy, have approved of these improvements, which they have regarded as important; the votes of the members of the advisory board, and the gratuity which His Excellency the Minister of the Interior has kindly honored me for this invention, embolden me to present it to the public with more confidence.”
Robert-Aglaé Cauchoix was born in 1776 in Cormeilles-en-Parisis just outside of central Paris. He studied at the colleges of Navarre and Lisieux and became an optician in 1792 establishing himself in 1803 at the Collège des Grassins, 27 quai Voltaire.
In 1804, the British scientist William Hyde Wollaston published his research on periscopic spectacle lenses (meniscus lenses) which provided an alternative to the standard double convex lens considered the most superior by London opticians. His work was intended (as per John Dollond before him) to find a solution to remove spherical aberration and was fiercely refuted by William Jones (of W&S Jones fame) but in 1813, the Frenchman Jean Baptiste Biot employed Cauchoix to replicate Wollaston’s work for evaluation. The outcome of Cauchoix’s work led to a paper being presented to the Academie on the subject.
In the same year, Cauchoix also obtained patents for the development of a telescope with variable magnification (lunettes polyaldes). Included above.
In 1819 he received a silver medal from the Society for the Encouragement of National Industry and a gold medal in 1824 for his work with Noel Jean Lerebours by which time he had built a 0.30 m aperture telescope which he sold in 1829 to the English amateur astronomer James South. In 1831 he sold a 0.33 m telescope to Edward Cooper of the Armagh Observatory in Ireland, the largest objective lenses available at the time.
His lenses earned him the Legion of Honor in 1834 after an exhibition of his work but he retired shortly after to Deuil where he became of mayor of the town from 1835 to 1844, ceding his business to his nephew, Rossin. He died on the 5th of February 1845.
Cauchoix was the first manufacturer to use flint glass produced in France, he also invented numerous development for telescope stands. He is recognised as one of the foremost instrument makers of the period, his work being used by the Paris Observatory to observe the rings of Saturn.
A rare and historic French telescope circa 1815.