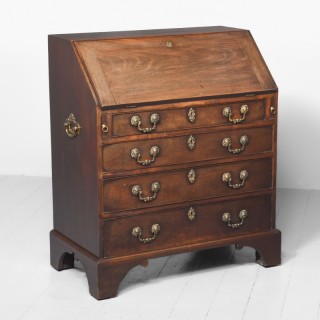 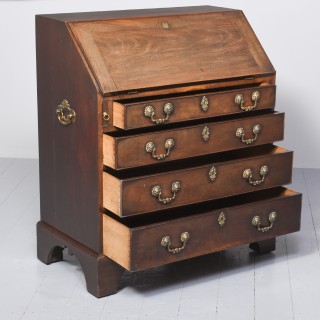 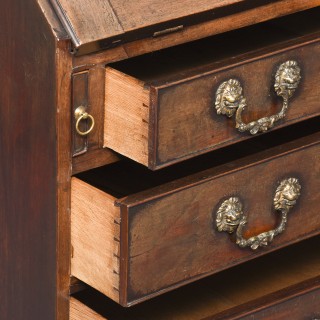 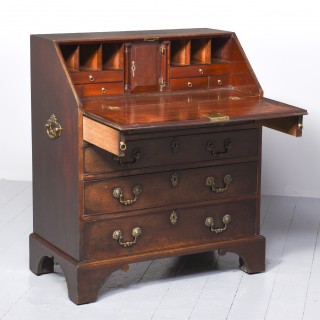 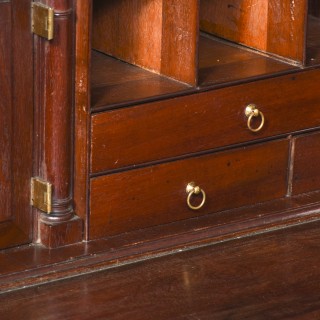 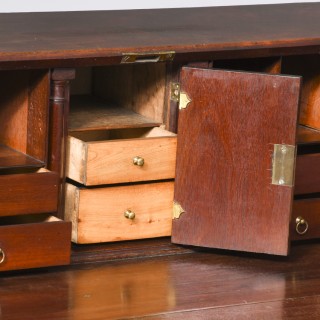 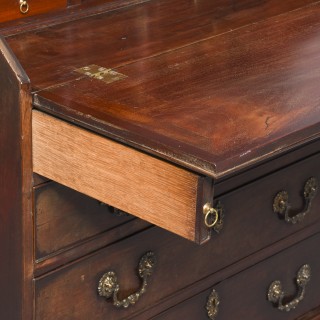 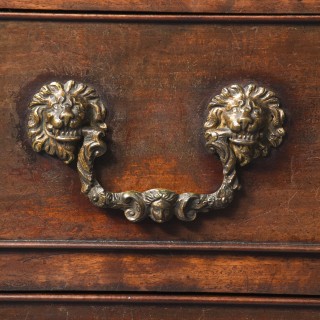 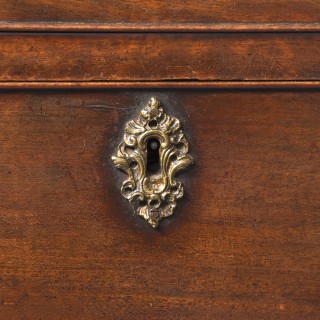 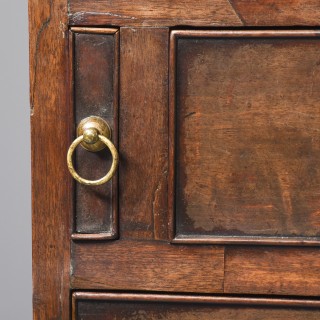 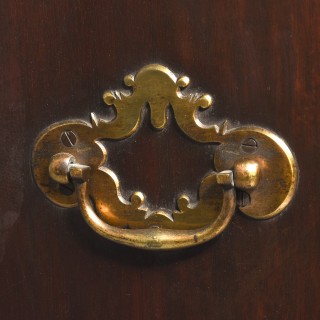 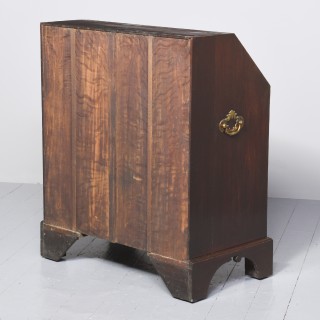 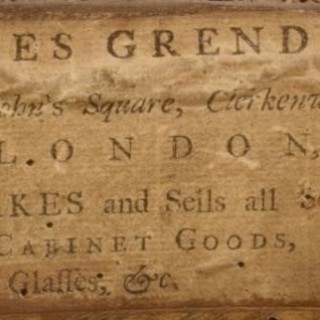 Circa 1740. A rare George II mahogany bureau firmly attributed to Giles Grendey in original condition. The polished top over a cleated flap with oval escutcheon, opens to reveal a well fitted interior, with a combination of pigeon holes, drawers, central cupboard with ormolu strap hinges pullout section secured by a wooden clasp which has secret drawers behind. The lopers with gilded oval pulls. A configuration of four graduating oak-lined drawers, with their original elaborate gilded rococo escutcheons and swan neck handles with a classical face in the center with back plates with gilded lion masks. To the sides a pair of gilded lifting handles, swan necked with a pierced back plate. All supported on a moulded base on four original stout bracket feet.

Grendey, Giles
London; cabinet maker (b.1693–d.1780)
Born in Wotton-under-Edge, Gloucestershire, Giles Grendey was the son of William and Anne (neé Hall) Grendey.
In 1709 he was apprenticed to William Sherborne and made free of the Joiners’ Company in 1716. By 1726 he was indenturing his own apprentices, one called Christopher Petfield, who petitioned at the Middlesex General Sessions to be discharge from his apprenticeship and for repayment of the ‘consideracon money’ of £5. Apparently suffering great abuse at the hands of his master, the order for discharge recorded that Grendey ‘beat Petfield in a very barbarous manner, sometimes with a great stick and at other times knocking him downe and then kicking him in the face and other parts and in stead of learning him his trade of Joyner sett him to sawing large timber which noe ways relates to the trade and hath likewise often theatened to be the death of the s.d peter’.
In 1720 Grendey married Elizabeth Van Knyven at St Mary Magdalen, Old Fish Street. He was elected to the Livery of the Joiner’s Company on 23 September 1729. An indication of his status in 1731 is seen in newspaper accounts of a fire that broke out in his workshop in Aylesbury House, St John’s Square, Clerkenwell, in the early morning of August 3rd. Grendey was described as a ‘Cabinet-Maker and Chair Maker’, who suffered great loss. Among the stock destroyed was ‘an easy Chair of such rich and curious Workmanship, that he had refus’d 500 Guineas for it, it being intended, ’tis said, to be purchas’d by a Person of Quality who design’d it as a Present to a German Prince’, along with furniture to the value of £1,000, which he ‘had pack’d for Exportation against the next Morning’. Fortunately the house and stock were insured [Daily Courant, Daily Journal, Daily Post, Daily Advertiser, all 4 August 1731; Read’s Weekly Journal or British Gazetteer, 7 August 1731].From 1732–39 he supplied furniture to Richard Hoare of Barn Elms, and in 1739 he worked for Sir Jacob de Bouverie of Longford Castle.
Grendey’s wife, Elizabeth died at their St John’s Square home in Clerkenwell (1740); she had borne several children, Mary (baptised 18 January 1721 and buried (1 December 1722); Elizabeth (baptised 23 October 1722); a second Mary; another daughter, Sukey; and a son, Samuel (baptised 7 January 1723).
From 1746–56 Grendey supplied furniture to Henry Hoare of Stourhead. In 1747 he was elected Upper Warden of the Joiners’ Company and advertised himself in the Daily Advertiser as ‘cabinet maker in St John’s Square Clerkenwell’. He is listed in the London Directory of 1755 as ‘Grindey, Giles, St. John’s Square’ and in the same year, on 31 March, his daughter, Sukey, married the London cabinet maker, John Cobb. Cobb’s Drummonds bank account records substantial payments to ‘Mr Grendey’ in 1759 and 1763.
In 1755 Grendey, still at Clerkenwell, made his will leaving £1,000 to each of his daughters and leaving the rest of his property to be shared equally between his two sons-in-law, both described as merchants: Goodson Vines of Bedford Row, who had married Elizabeth; and Frederick Rasch of London, who had married Mary.
On 16 January 1758 he insured his St John’s Square Clerkenwell property for £1000 and on 13 April of the same year, ‘his household goods utensils stock in trade (glass excluded) in his dwelling house & warehouse at £800. Stock in his yard at £200. [London Metropolitan Archive, Sun MS vol. 121, p. 542; vol. 122].
He was elected Upper Warden of the Joiners’ Company again in 1757 and in 1766 was elected Master. However by then he was seventy-two years of age and apparently neglecting his duties; in June 1767 the Clerk wrote requesting better attendance and that he was to attend the next Court, or ‘such methods will be taken as shall be adjudged proper, which ‘tis hoped he will prevent as the same will be equally disagreeable to the Court as to himself’.
In 1770 the premises of George Seddon (insured for £4,300) were mortgaged to Grendey [London Metropolitan Archive, Sun MS, 1770, ref. 281763].
By 1779, he added a codicil to his will and had moved to Palmer’s Green where he had ‘a dwelling house, coach house, stable building, and ground … lately purchased … and which I have since converted into five cottages’. He died there on Friday, 3 March 1780, aged eighty-seven [London Evening Post, 7–9 March 1780, Gents Magazine, 1780, p. 154].
He labelled some of his products and surviving labels have allowed their identification, of which two are known, with one illustrated in the product images (not on this product – credits to BIFMO) 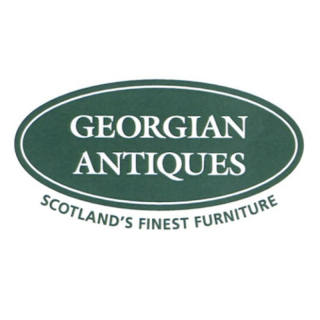