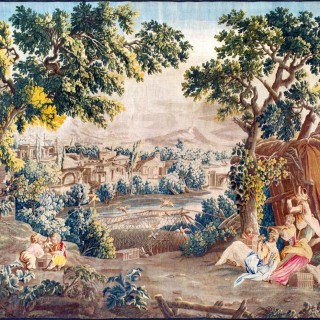 In this tapestry, it is depicting a group of young nobles and children catching birds in the countryside. On the right, we can see two noble ladies with one sitting on the ground while the other holding a string in her hand which connects to an open nest for catching birds. There is a young bod standing and a man looking to the direction of the open nest anxiously. The nest is placed in the middle of the composition with lively depicted birds flying around it. On the left, two kids are sitting on the ground with a cage, seemingly enjoying themselves with the bird inside of it while ignoring the situation behind them. The foreground is decorated with trees and an old and small building, while in the background we can find the lake in the middle and buildings and a mountain in the background.

The whole tapestry is composed in a grisaille manner, it is also can be considered paradigmatic of the taste for scenes galantes that largely dominated painting and the decorative arts in eighteenth-century France. Produced at the Beauvais Royal Factory, which was set up in 1665 during the reign of Louis XIV, the carton was by the French painter François Boucher, whose countless images were a major contribution to the factory’s success.

Responding to the rage depicting amorous countryside games by then, François Boucher here portrays the fashionable nobles in the act of catching birds. In the 1700s, small birds played an important symbolic role in courtship ritual: the gift of a caged bird from a man to a woman signified her capture of his heart.

Discovered from a castle near Bordeaux, France; private collection

Excellent condition with vivid strong and bright colours, with its original bordure, no restoration. 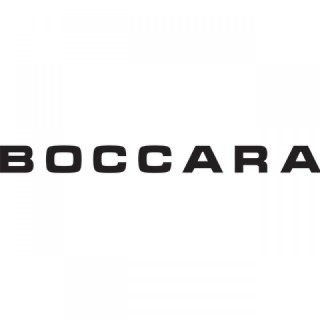