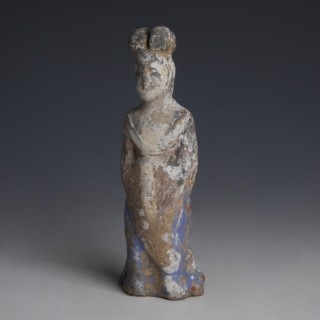 A beautiful solidly moulded flat-backed grey earthenware figurine of a female court attendant with traces of the original pigmentation. The attendant stands facing forward with hands held together in front and concealed by the long sleeves of the gown, as was the customary for members of domestic staff. The figure is shown wearing a magnificent high wasted bright blue gown with thick white hems. Facial features are slightly in relief, with hair tied into two buns on top of head.

The Zhou dynasty was a Chinese dynasty that followed the Shang dynasty and preceded the Qin dynasty. Funerary figures from the Zhou Dynasty are extremely rare, consequently there are few comparable examples. The tomb of Li Xian (c. AD 569), a general in the army uncovered in 1983 at Guyuan, in Ningxia Autonomous region afforded us a few examples of guardian warriors which can now be viewed in the Guyuan Museum.

Fine, with some signs of ageing and earthy encrustations on the surface.