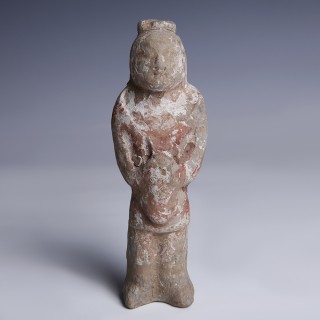 A rare moulded grey earthenware figurine of a male court attendant dating to the Northern Zhou Dynasty. The attendant is portrayed in the standard position of Northern Zhou statuettes: facing forward with a slightly arched back. He wears the traditional court attire, the Shenyi, consisting of a short vest tied to the waist and long sleeves with fragments of the original paint pigment in which the figure was originally adorned with. The attendant stands in a reverent pose, with his hands held together at the front below his chest, though concealed by the vest’s sleeves, as was customary for members of domestic staff. Two holes are pierced above them, perhaps to hold an offering of incense. A simple headpiece sits high on the man’s head covering his tied hair and leaving visible his facial features, rendered slightly in relief and portraying a solemn expression.

Fine condition; signs of ageing to the surface.