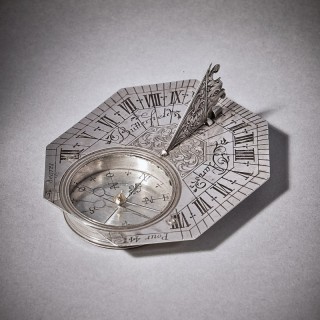 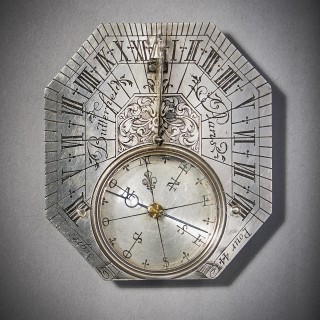 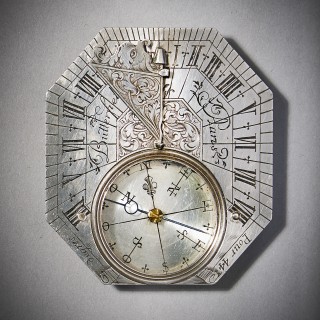 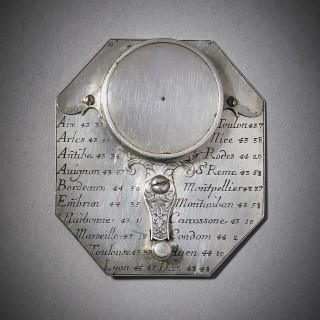 The sundial is made for a latitude of 44° and could be used in places in the south of France such as Avignon and elsewhere along this parallel. The elaborately engraved base plate has a Roman chapter ring on which the gnomon (a triangular flap) casts its shadow. It is signed by the maker in the following manner: Butterfield A Paris. On one side is a glazed recessed compass with a blued steel hand to position the instrument in such a way that the time can be read. The hinged triangular gnomon is richly engraved and in the shape of a bird’s head. The folding gnomon and cut corners enable the dial to be carried in the pocket.

Its maker Michael Butterfield was an English instrument maker who based himself in ‘Le Quay de l’Horloge’ of Paris from circa 1685. These types of dials, often replicated by other makers, became known as Butterfield Dials after their original inventor.

They were a fashionable and functional traveller’s accessory from the late 17th century onwards. Interestingly, early watches did not keep time particularly well and a dial such as this were used to regularly set a watch. Anecdotally, sundials may also have been preferred to sounding timepieces whilst on the road – the chimes being thought to attract thieves.