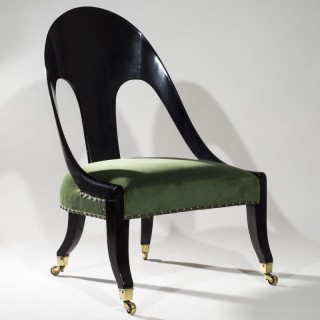 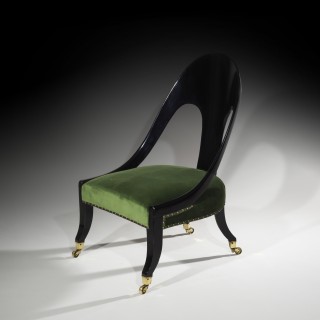 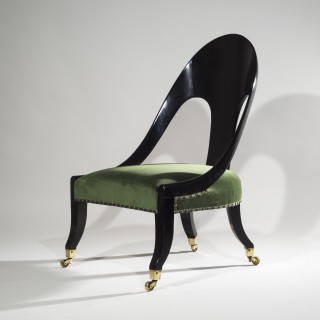 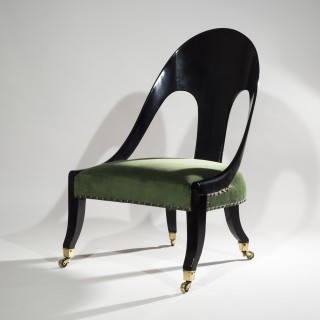 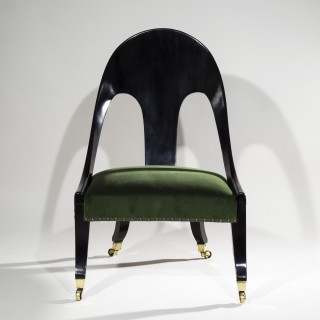 The arched spoon back over upholstered space-nailed seat, raised on sabre legs, on original brass caps and castors.

Early 19th century’s fashion for Greek and Roman ‘Antique’ style in furniture and interior decoration was highly influenced by the aesthetic of Thomas Hope and the publication of the guide to his Duchess Street mansion entitled ‘Household Furniture and Interior Decoration’, in 1807. The distinctive scoop-form of this chair derives from Hope’s drawing, pl. XXVI. This pattern was described as ‘Roman’ in The London Chair-Makers’ and Carvers’ Book of Prices Supplement, 1808 (pl.1) and is illustrated in Regency Furniture Frances Collard, 1985 pg. 106.

A related pair of ‘Shell chairs richly inlaid with ebony in antique ornaments’ were invoiced in 1806 by Messrs. Morel and Hughes for the library at Weston Park, Staffordshire (P. Rogers, ‘A Regency Interior: The Remodelling of Weston Park’, Furniture History, 1987, fig. 3).

In W. Mann, Wiscracker: The Life and Times of William Haines, Hollywood’s First Openly Gay Star, Viking, New York, 1998, p. 335, Betsy Bloomingdale recalls a dinner party held at Jack Warner’s Los Angeles house: “I remember there were four of these wonderful, marvelous black lacquered chairs of Billy Haines’ design. I remember everything about that night – the servants, the dinner. What’s been so wonderful for me is that eventually in my life, Bill Haines did a house for me, too. I got a Crown Derby dinner service, just like there was on the table at the Warners’ that night. And when the Warner furniture went up for auction, I bought those four black lacquered chairs and have them now in my house.”

Jack L. Warner’s Beverly Hills mansion was designed by architect Roland E. Coate, with the interior installed by William Haines. Haines is credited with ushering in the trend for neoclassical interiors in Hollywood, and the Warner house exemplified the design that became Haines’ trademark: classic 18th century interiors with a touch of whimsy.