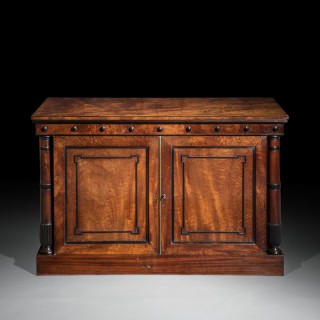 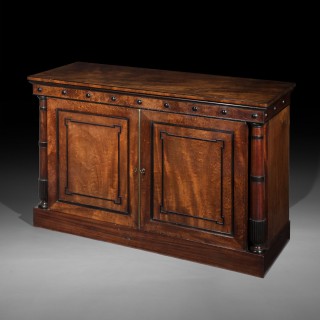 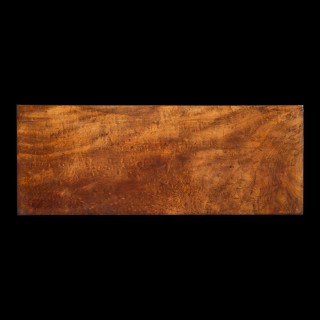 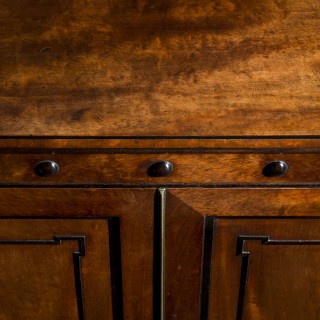 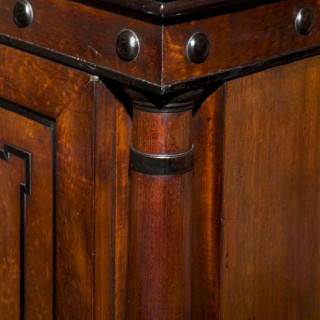 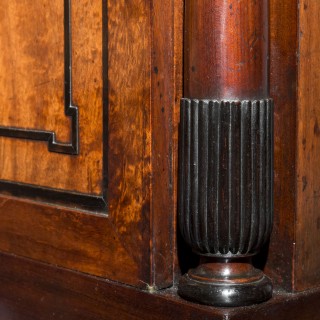 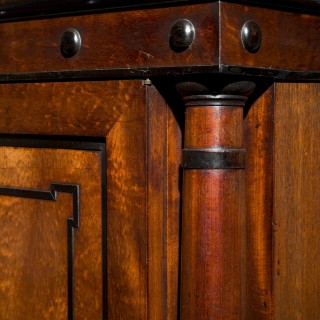 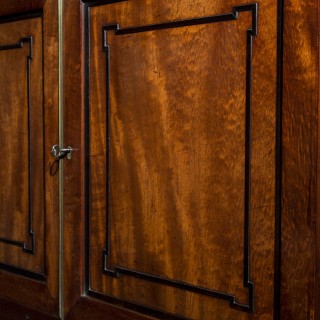 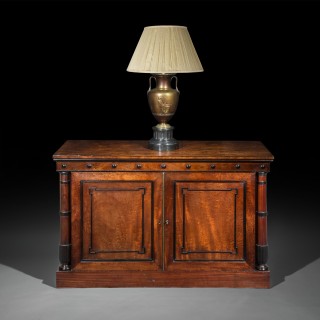 Regency Side Cabinet or Bookcase, in the manner of George Bullock

A fine quality Regency period console cabinet, in figured mahogany with ebony enrichments in the manner of George Bullock

Why we like it
This distinctively graphic, minimalist design, combined with the most spectacularly figured veneers and fine geometric decoration, make this splendid piece a perfect masculine accent in a classical or contemporary interior. Timelessly restrained design, perfect as an anchor point for a modern painting or sculpture or for a collection of Grand Tour bronzes and marbles.

Embellished in the Grecian manner, it features ‘altar’ plinth and cornice, with a pair of Grecian-black ribbon inlaid doors, flanked by pilasters after the ‘antique’ fashion, introduced around 1800 by the connoisseur Thomas Hope (d.1842).

George Bullock
Furniture by George Bullock (1783 – 1818) was much sought after by European nobility, including Emperor Napoleon Bonaparte (1769 – 1821). The present piece bears a distinct similarity with other examples from Bullock’s workshop, including a similarly graphic in decoration suit of mahogany and ebony furniture, commissioned in 1815 by George, Prince of Wales, later King George IV, for the exiled and defeated Emperor Napoleon’s use at New Longwood House, St Helena. Praised for its ‘tasteful simplicity’ in Rudolph Ackermann’s Repository of Arts, the St Helena furniture was meticulously described in the Times article ‘House and Furniture for Bonaparte’ of 25 October 1815. A pedestal table at Anglesey Abbey, Cambridgeshire, similarly in mahogany with ebony decoration, displays a number of similarities to the present cabinet.

In 1815 Bullock was famed as being amongst London’s ‘most tasteful and ingenious artists’. His furnishings at New Longwood, designed to harmonise with the architecture ‘in the pure simplicity of the Grecian style’ executed by William Atkinson (d.1839), ‘architect for the Ordnance Department’, were intended to provide an appropriate residence for the ‘Ex-Emperor’, whom some likened to Thermistocles, the exiled Athenian statesman and Commander.

Regency Side Cabinet or Bookcase, in the manner of George Bullock

in the manner of george bullock