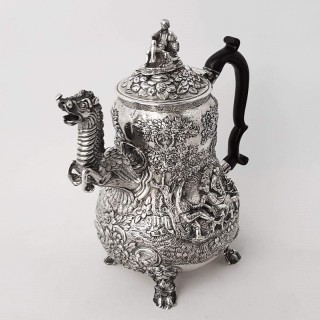 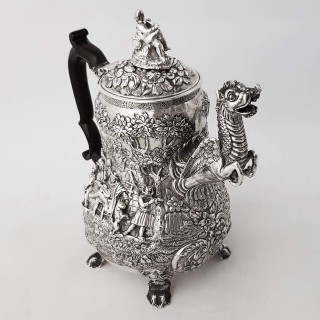 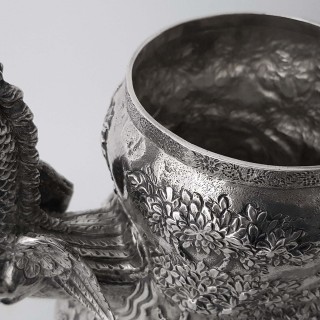 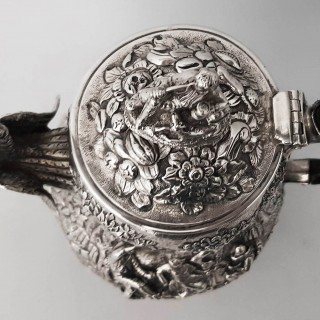 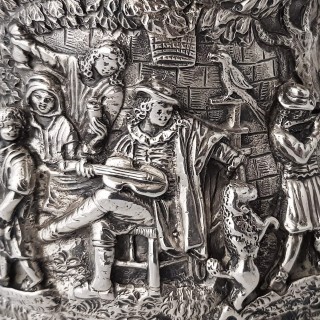 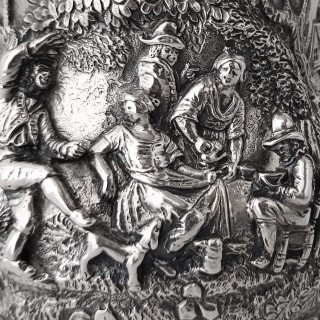 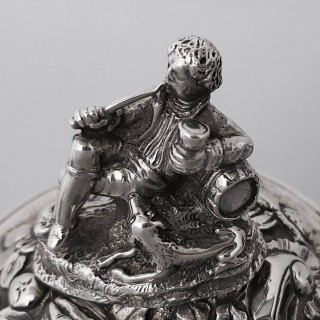 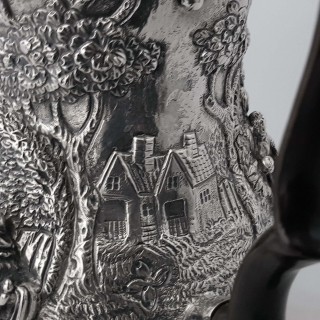 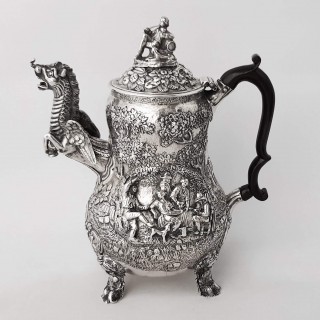 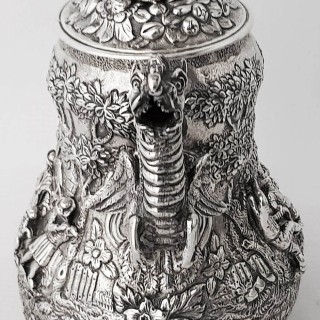 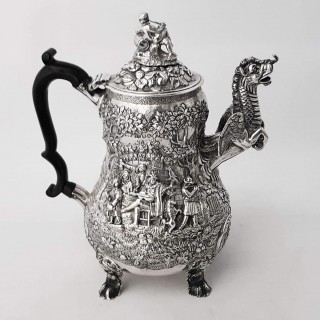 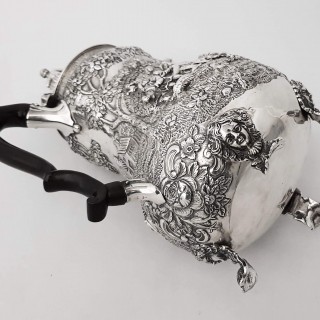 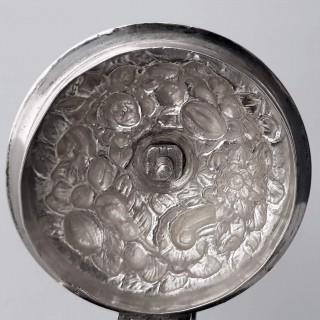 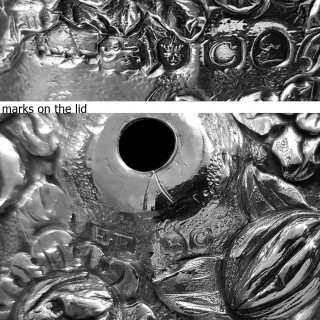 An outstanding quality antique silver coffee pot of gourd form, the body depicting Dutch tavern scenes after David Teniers, deeply chased in relief. Made by Edward Farrell, one of the most innovative silversmiths of the day. The fabulous spout, in the form of a dragon with outstretched wings, is very rare and unrecorded. The drunken revellers are drinking, playing music and dancing in the company of serving wenches, dogs and a caged bird. The lid finial depicts a man reclining with his dog, drinking and smoking a long pipe.

Maker Edward Farrell, known for his most unusual productions of the Regency period, generally conceived in a kind of revival rococo.

Marks. Stamped on the front of the body with a full set of English silver marks; lion, date letter and maker’s mark under the lid.

EDWARD FARRELL
Edward Farrell, born circa 1780. No mention of apprenticeship or freedom. 1st mark entered as plateworker 1813. 2nd mark 1813. 3rd mark, 2 sizes, 1819. The mark of this maker, of whom little is known, is found on some of the most unusual productions of the Regency period, generally conceived in a kind of revival rococo. This outstanding silversmith produced some magnificent work, particularly in association with the silversmith and retailer Kensington Lewis whose prestigious customer base included the Duke of York. Farrell produced the remarkable Hercules candelabrum for the Duke of York in 1822. There is a Neptune candelabrum in the V & A museum – http://collections.vam.ac.uk/item/O64607/candelabrum-farrell-edward/.http://collections.vam.ac.uk/item/O64607/candelabrum-farrell-edward/.

David Teniers the Younger was a 17th-century Flemish painter known for his luminous depictions of peasant life, influenced by the tavern scenes of Adriaen Brouwer and the fluid paint handling of Peter Paul Rubens. Born 1610 in Antwerp, Belgium, son of the artist David Teniers the Elder, Teniers married the daughter of the painter Jan Brueghel the Elder. In the early 1630s, the Haarlem-based painter Brouwer moved to Antwerp, Teniers exposure to his low-genre paintings was a turning point in his career and over the following decades, he enjoyed a popular reputation around Europe. Teniers died in 1690. His work can be found in the Louvre in Paris, the National Gallery of Art in London, the Hermitage Museum in St. Petersburg, and the Rijksmuseum in Amsterdam, among others.

In very good condition. The handle is tight. The pot does not leak. Decoration is crisp.