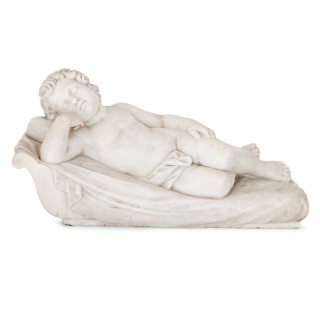 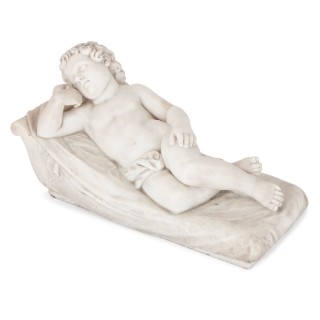 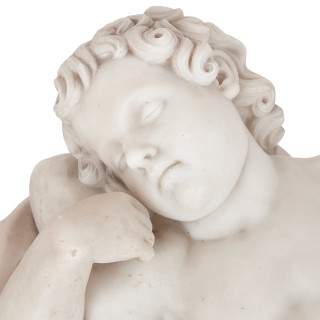 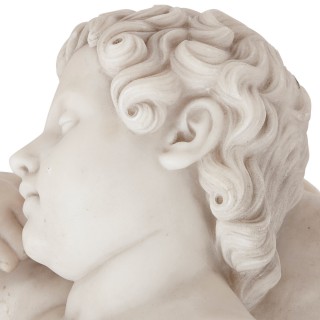 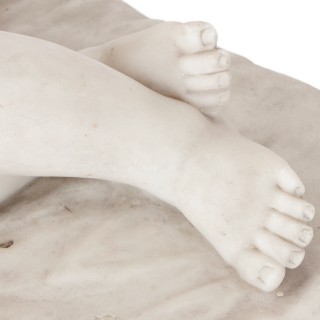 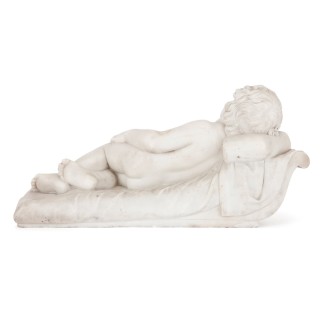 This marble figure of a sleeping child was crafted around 1800 in the style of François Duquesnoy, a sculptor active in Italy in the early 17th Century. Duquesnoy’s bas-relief work at the Villa Doria Pamphili in Rome is often credited with establishing a prototype for sculptures of putto and cherubs. These sculptures had a great impact on the way that Rubens and other influential artists painted putto in the later Renaissance and Baroque period.

The sculpture depicts a young child asleep on a daybed. The child is naked except for a piece of drapery, which partially covers his body. This fabric covers the bed, and has been carefully rendered so that is appears light and diaphanous, with every fold made visible.

The child’s body is clearly inspired by idealised, ancient sculpture. The boy’s face is classically beautiful, and his hair is composed of tight, corkscrew curls. His body is plump, as a young child’s body is, but his torso is well-defined. The boy lies on his side, with his left leg bent back at the knee, and his extended right leg resting on top of it. Mirroring his legs, his right arm is bent and raised to support his face, while his left is placed on his leg. This pose, where the boy lies on his side rather than his back, invests the sculpture with movement and life. It is as though the child might turn over or wake at any moment.