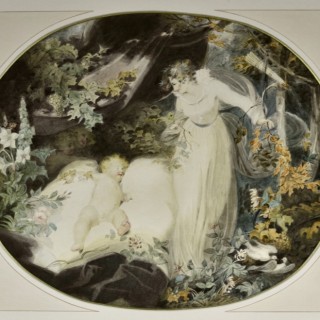 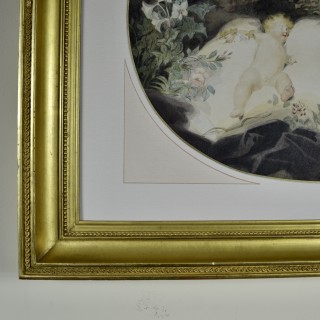 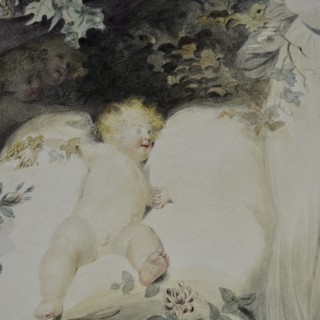 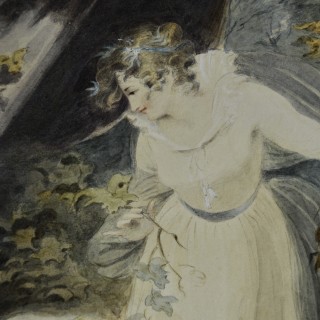 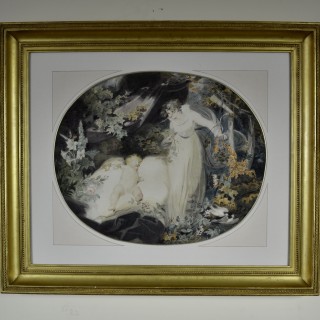 Cupid Sleeping; from a poem of Mrs Robinson

– The Duchess of Devonshire Discovers the Sleeping Cupid

Westall painted in both oil and watercolour, his works being romantic and neoclassical in style. He contributing to both Boydell’s Shakespeare Gallery and Fuseli’s Milton Gallery and was also a prolific book illustrator of both fiction and poetry including works by Sir Walter Scott and Byron, whose portrait he also painted. For a time he was also art master to the young Princess Victoria.

This is probably Westall’s 1792 Royal Academy exhibit (no.448). The subject was inspired by the poem Cupid Sleeping by the poetess-actress Mary Darby Robinson, which had been published in the previous year. The poem was dedicated to Georgiana, Duchess of Devonshire and the picture show the Duchess discovering the sleeping cupid who she then relieves of his bow and arrows. Mrs Robinson was not only the Duchess’s protégée but also the first public mistress of the Prince of Wales. William Nutter’s engraving of Westall’s picture was also dedicated to the Duchess of Devonshire.

Close in a woodbine’s tangled shade,
The blooming god asleep was laid;
His brows with mossy roses crown’d;
His golden darts lay scatter’d round;
To shade his auburn, curled head,
A purple canopy was spread,
Which gently with the breezes play’d,
And shed around a soften’d shade.
Upon his downy smiling cheek,
Adorned with many a “dimple sleek,”
Beam’d glowing health and tender blisses,
His coral lip which teem’d with kisses
Ripe, glisten’d with ambrosial dew,
That mock’d the rose’s deepest hue.–
His quiver on a bough was hung,
His bow lay carelessly unstrung:
His breath mild odour scatter’d round,
His eyes an azure fillet bound:
On every side did zephyrs play,
To fan the sultry beams of day;
While the soft tenants of the grove,
Attun’d their notes to plaintive Love.

Thus lay the boy–when Devon’s feet
Unknowing reach’d the lone retreat;
Surpriz’d, to see the beauteous child
Of every dang’rous pow’r beguil’d !
Approaching near his mossy bed,
Soft whisp’ring to herself she said:–
“Thou little imp, whose potent art
Bows low with grief the feeling heart;
Whose thirst insatiate, loves to sip
The nectar from the ruby lip;
Whose barb’rous joy is prone to seek
The soft carnation of the cheek;
Now, bid thy tyrant sway farewell,
As thus I break each magic spell:”
Snatch’d from the bough, where high it hung,
O’er her white shoulder straight she flung
The burnish’d quiver, golden dart,
And each vain emblem of his art;
Borne from his pow’r they now are seen,
The attributes of Beauty’s queen!
While Love in secret hides his tears;
Diane the form of Venus wears!