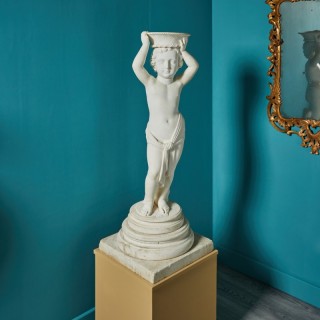 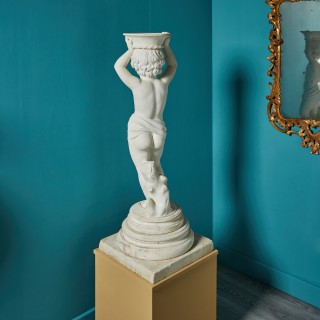 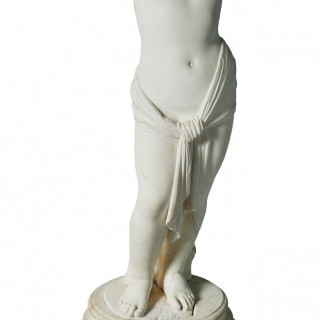 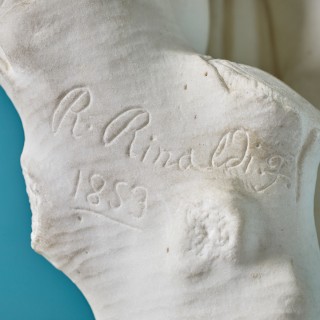 Rinaldo Rinaldi Marble Statue of a Putto. A wonderfully sculpted, white statutory marble figure of a putto. The figure is signed and dated 1853 and features decorative drapery and a latticed basket above his head.

Rinaldi began wood carving from the age of 8. At 18 he had turned his attention to working on stone pieces. He went on to study at the Accademia di Belle Arti in Venice under the supervision of Leopoldo Cicognara.

Rinaldi was born in Italy in 1793 and was son of the Italian Sculptor Domenico Rinaldi. Through his expert tutoring, he produced some of the finest examples of 19th century marble sculpture’s ever produced.

Examples of his work can be found in the Louvre and the Hermitage in St Petersburg. His clients included William Cavendish and Tsar Nicholas the 1st of Russia.

Rinaldi’s talents earned him knighthood as cavalier of the Order of the Crown of Italy by King Vittorio Emanuele. And numerous other achievements until his death in 1873. The Crystal Palace Company held a sculpture exhibition with the largest collection ever seen within the U.K in 1936. Rinaldi was a part of this.

Good structural condition. There is slight pitting to the chest. Historic repair to the foot. Lacking one finger.