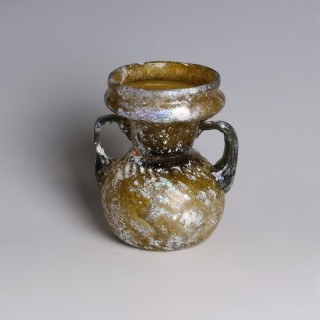 A finely modelled Roman pale yellow blown glass flask with a rounded body, leading to a cylindrical neck and a wide, ridged lip. Within the neck is a contricted opening. Two blue trailed handles add further decoration and have been applied to the neck and the shoulder. There is widespread iridescence across the whole vessel and some natural encrustation.
Glass production evolved during the Roman Empire with the introduction of glassblowing, which allowed for a great variety of different shapes and styles to be constructed. The technique allowed for easier manipulation of the glass into more intricate designs allowing the vessels to have an assortment of functions. This glass flask, known as a sprinkler flask, is constricted through the inside of the neck to help control the distribution of the liquid it was containing. More expensive fluids, such as perfumes, medicines or oils would be placed in sprinkler flask so that their use was controlled. Glassblowing also allowed for a quicker paced production, the hot glass would be blown into a mould and then removed whilst still hot so that the glass maker could still work on it. Different minerals were added to create a variety of colours; a yellow tint was created by adding lead and changing the oxygen levels.

Provenance: Private collection belonging to a gentleman, The J.L Collection.