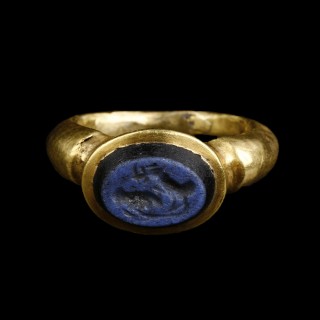 A fine Ancient Roman gold ring featuring a tapered, round band. The central feature is a glass paste nicolo intaglio set neatly in a gold bezel. Engraved in the stone is the image of two birds, one stood upright, and the other stooped to pick something from the ground in its beak. Though birds are a common motif, the dynamic composition of this scene makes for a lively and interesting item. UK ring size K. Weight: 5.6g.

Intaglio rings were a popular style of jewellery in Ancient Rome and have been uncovered across the full geographic extent of the former Roman Empire. The nature of their individual production meant that designs and details show a wide variety, though there are common themes, such as certain gods, which were especially popular, though more earthly themes such as animals and mortal figures also appear regularly. The custom of wearing gold rings spread during the Roman Empire, where jewellery became more and more elaborate, embracing new designs and techniques, such as the nicolo. The nicolo is an intaglio or cameo carved in banded onyx, agate or glass in such a way that the depiction, engraved on the pale top layer, reveals the dark colour underneath.