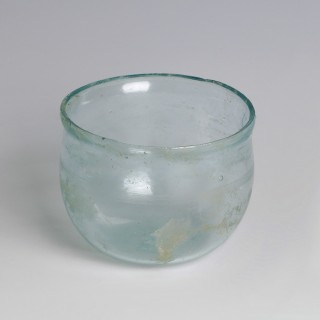 An extremely fine Roman translucent, pale blue blown glass cup featuring a slightly inverted rim, a flat base and well-cut lines to the body. As the Roman Empire progressed and expanded, glass production evolved drammatically, becoming one of the Empire’s leading commercial industries. The vitriarii, glassmakers, had been introduced to the glassblowing method which was used to expand their repertoire of shapes and designs significantly. As a consequence, Roman glass was then used as a great trading commodity across the whole of the known world. Glassblowing allowed different shapes and designs to be forged, the walls were able to become thinner creating a more translucent appearance. Different coloured glass was created by adding different metals during the process. The addition of copper created a blue and green colouring, much like this cup, which has also been created with the typical thinner walls customary of glass blown vessels, allowing for a beautiful transparency.

Provenance: Private collection belonging to a gentleman, The J.L Collection.

Very good condition. Minor scratches and chips to the rim.