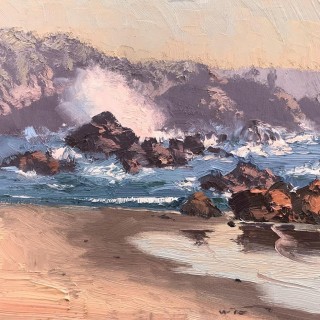 With the exception of studying with Kevin Oxley in 1979, Warwick received no formal art training. Influenced instead by the landscape paintings of his grandfather, hanging and stored at home, Warwick started painting, sculpture and printmaking. He is now one of Australia’s foremost living landscape painters, elected a Fellow of the Royal Art Society of New South Wales, President of the Friends of the Lewers Bequest and Penrith Regional Art Gallery and a Member of the Sculptors Society, Sydney. “I have been painting full-time since 1978 and still can’t compare the controlled studio calmness to the thrill of painting from life with all my senses activated…. “Camping under the stars in a clay pan west of Bourke New South Wales, watching a ‘total eclipse of the moon’, I was thinking about a sketch that I’d painted late that afternoon. What I attempted to capture in that painting was not the ‘things’ before me, that is the trees, the grass, the sky etc. As always, well nearly always, I was captivated by something less tangible, a quality about the scene that struck an emotional chord within. That is for me what painting is all about, trying to discover ways of expressing what I feel about the physical world around me…. How can I paint a frosty morning if I don’t have cold feet!” Now with over thirty one man exhibitions to his name, his numerous collectors include Hawkesbury Shire Council, Austen & Butta (Portland), Mudgee Shire Council, Baulkham Hills Council, Penrith City Council, Penrith City Public Library, Ashfield Municipal Council, Sutherland Shire Council, Goulburn City Council, Neapern District Hospital, Shoalhaven Council, Fairfield City Council, Crookwell Shire Council, Telecom Australia and North Sydney Public Library. In November 2012 Warwick accompanied His Royal Highness The Prince of Wales and Her Royal Highness The Duchess of Cornwall as their Official Tour Artist, during their tour of Australia. The Prince of Wales became familiar with Fuller’s work through Panter and Hall. Fuller says, “I was completely overwhelmed when I learnt of the surprising request from The Prince of Wales”. Paintings from the tour that are acquired by the Prince of Wales will become part of the Royal Collection when he ascends the throne. Fuller describes the whirlwind tour as being orchestrated “at a relentless pace, with military precision, planning and timing”, something that is most likely unfamiliar to an artistic temperament. Additional challenges included weather, which at Bondi Icebergs saw an uncharacteristic and sudden deluge ruin a work in progress. Yet he managed to finish with nine paintings, together with a number of sketches. Warwick had his first London solo exhibition in 2004 at the Panter & Hall Gallery.