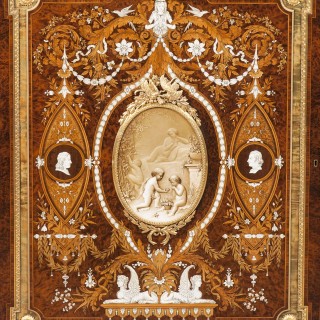 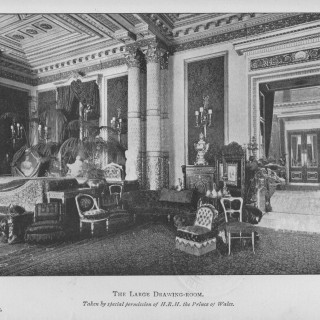 Royal Cabinet for Albert Edward, The Prince of Wales

A Magnificent Royal Cabinet, commanded from Holland & Sons, for Albert Edward, The Prince of Wales (later King Edward the VIIth), and Princess Alexandra, having a marque de fer, the Royal Inventory mark ‘MH, crowned’ for their residence, Marlborough House.

Of rectangular form, the central breakfront door, enclosing a shelved interior is elaborately inlaid with engraved ivory and specimen woods, having a central situated ivory inlaid female bust holding ribbon-tied plaits issuing and supporting a bronze framed elliptical plaque painted in sepia tones, of a putti waking Cupid, flanked by portrait heads of two great English poets, John Milton and John Keats: the whole design supported by addorsed griffins; the frieze with gilt-bronze cornucopia and foliage, having canted corners, the paneled sides set with elaborate musical and artistic trophies, the whole veneered with burr-yew within sycamore, boxwood and walnut crossbandings: the back stamped M H below a crown and an old distressed label, the top of the door stamped Holland & Sons, the inside with a plaque reading ‘Holland & Sons, 23 Mount St. London’.

Built in the early years of the eighteenth century, Marlborough House was designed by Sir Christopher Wren for the great Duke of Marlborough, whose descendants continued to occupy this palatial London mansion until the early 18th century, when it passed to the Crown. In 1863, the house was occupied by Albert Edward, Prince of Wales, later King Edward VII, and his consort, Princess Alexandra of Denmark, following their marriage on March 10th of that year. The Royal couple continued to live and entertain at Marlborough House until the Prince’s Ascension to the throne in 1901. In anticipation of the Prince and Princess’s arrival, the interior of Marlborough House was extensively remodelled under the direction of the architect Sir James Pennethorne. A suite of fashionable new reception rooms were created, providing the setting for sumptuous entertainments attended by leading figures from British and foreign society. As part of these works, which continued for several years, quantities of furniture were ordered. It was at this point undoubtedly that the present cabinets were commissioned from Holland & Sons. Photographs of the interior of Marlborough House shows this cabinet in the Large Drawing Room. (Arthur H Beavan, Marlborough House and its occupants Past and Present, London, 1896. pp. 25-5).

The commissioning of these pieces and indeed all the Holland and Sons furniture is consistent with the approach taken by the Prince and Princess of Wales to the decoration of their official London residence. They intended for Marlborough House to be a showcase of the highest quality of English craft and design, demonstrating to innumerable foreign dignitaries what England had to offer. As one contemporary commentator wrote of the house ‘in connection with furniture, it has been said that with truth, both the Prince and Princess have ever since their marriage done their utmost to encourage home manufacturers in every department and … everything in Marlborough House may broadly speaking be said to be of British make.’ (Beavan, op. cit., p. 55)

Originally founded in 1803 by Stephen Taprell and William Holland, a relation of the architect Henry Holland, the firm of Holland & Sons soon became one of the largest and most successful furniture making companies in the 19th Century. The firm worked extensively for the Royal Family, being granted the Royal Warrant early in the reign of Queen Victoria, hence taking a leading part in the decoration and furnishing of Osborne House, Sandringham, Balmoral, Windsor Castle and the apartments of the Prince and Princess of Wales at Marlborough House. Holland and Sons also worked extensively for the British Government, for whom they executed over three hundred separate commissions, including the Palace of Westminster, the Victoria and Albert Museum, and oversaw the State funeral of the Duke of Wellington. Among their private commissions the firm produced a celebrated suite of bedroom furniture for the late Sir Harold Wernher at Luton Hoo.

Arthur H Beavan, Marlborough House and its Occupants Past and Present, London, 1896;
Arthur Beavan’s description of the Great Drawing Room at Marlborough House states that it included a pair of fine side cabinets, which cost ‘£300 a-piece’ (Beavan, op. cit. p. 28)

The fashion for porcelain-mounted furniture was of French inspiration, having been pioneered at Sèvres in the mid-18th century. The porcelain roundel to the front of the cabinet is decorated in a technique known as en camaȉeu, which was a nineteenth-century development of the pâte-sur-pâte process. Involving the layering of tints of a single colour to create an illusion of a higher relief than there is in reality, the process was developed by Louis Marc Solon who defected from Sèvres to Minton at Stoke-On-Trent during the Franco-Prussian war. Modelling maidens and cherubs on plaques and vases, Solon and his apprentices soon perfected the process and Minton became the unrivalled leader in the field.

Royal Cabinet for Albert Edward, The Prince of Wales