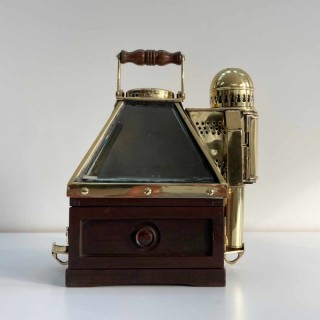 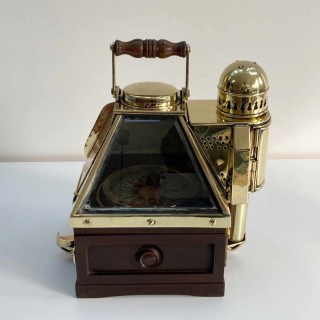 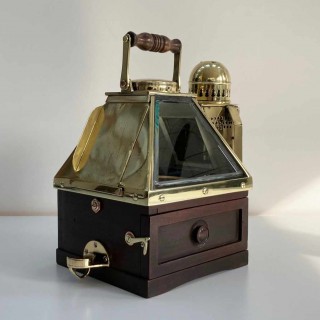 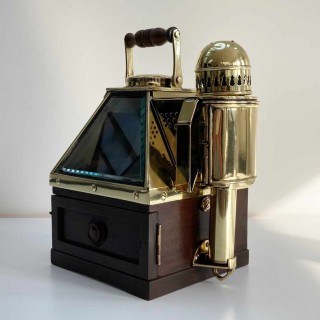 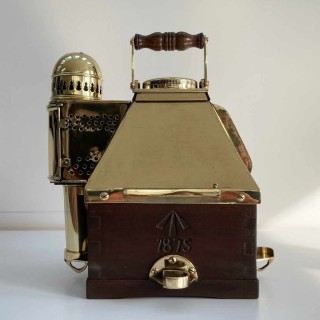 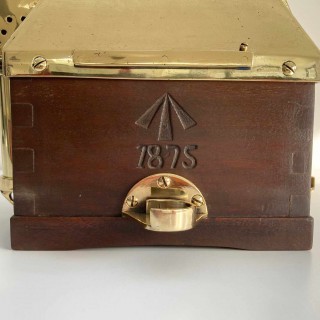 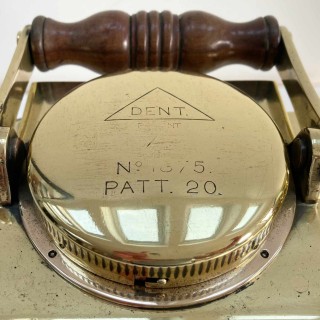 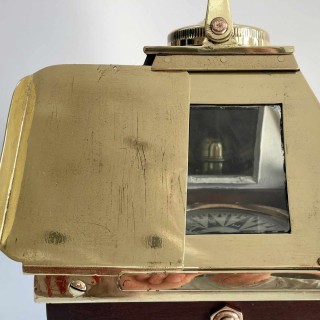 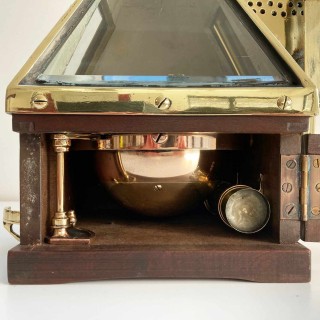 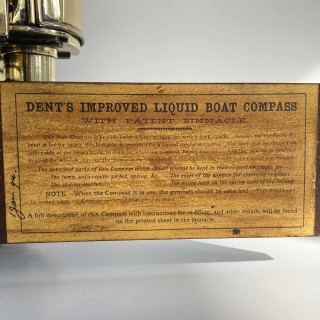 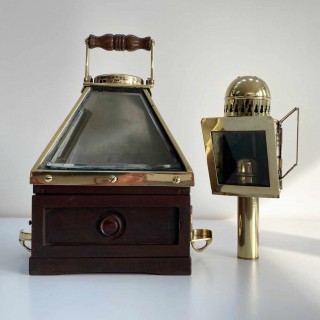 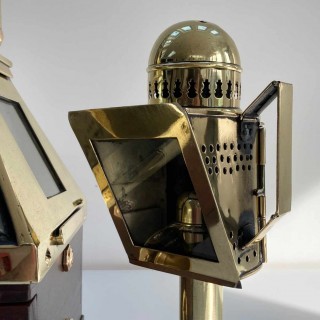 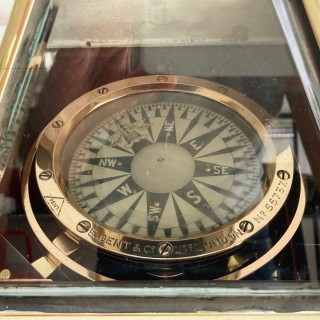 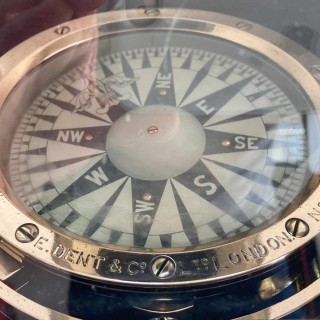 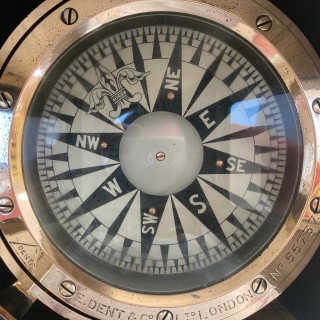 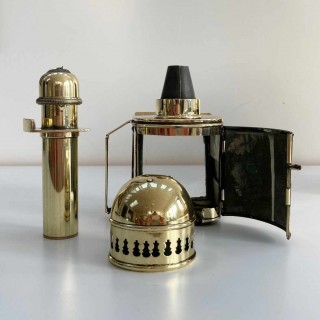 Comprised of a mahogany compass base housing with hinged front opening and a brass pyramidal and thick cut bevelled glass viewing section above. The base section opens to reveal the compass bowl with integral locking mechanism for transit and a receptacle for a spare candle (candle still present). The back of the door has paper instructions as follows:

The detached parts of this compass which should always be kept in their respective places are, the lamp, with candle socket socket spring etc. The cover of the window for observing bearings. The sliding shutter.

A full description of this compass with instructions for re-filling, and other details, will be found on the printed sheet in the binnacle”.

To the reverse of the wooden base is engraved the war department crows foot emblem with the number 1875. Tempting to consider this as a date reference but most certainly an inventory number owing to the date of the Pattern 20’s release by Dent. On the three sides there is also a brass holding receptacle which supports the base of the lamp when in its chosen operating position.

The lamp is comprised in three parts, which are easily dissembled, the candle holder with sprung base for maintaining the candles length when in use, the shade with glazed panel, access door and chimney and a chimney shade to rest over the top. The angle of the glazed panel is manufactured in order for it to slide easily into three different position around the body as required.

The top of the binnacle case has a screw cap revealing an additional window, the cap is engraved with, “Dent Patent” and “serial no: 1375 – Pattern 20”. It also retains its original brass and turned wooden carrying handle.

The Dent patent boat liquid compass is contained within a brass bowl on a gimballed mount with a mica card graduated to half points and a central float. It is detailed with a fleur de lys at the North point with Dent written across.

The thick brass bezel is further engraved with the Dent logo followed by “E Dent & Co Ltd London” and serial no: 55737.

A super early example with all of its element retained and in good working order. Circa 1894

The founder of the company, EJ Dent was born in 1790 in London and although he was apprenticed to his grandfather as a tallow chandler, his lodging with his watchmaking cousin Richard Rippon, fuelled an early interest in the trade. By 1807, Dent gained agreement for his apprenticeship to be transferred to the watchmaker Edward Gaudin.

After gaining his freedom, Dent then worked as a jobbing clockmaker to various noted firms but by 1826 he was confident enough to have submitted two chronometers to The Admiralty at Greenwich for trials and just two years later he was employed by The Greenwich Observatory to repair chronometers. His submissions of 1829 finally won the prize for that year.

In 1830 Dent partnered with the established clockmaker John Roger Arnold of 84 The Strand forming a new company, Arnold & Dent and a year later they had supplied chronometers to Captain Fitzroy for the initial HMS Beagle expedition.

The partnership ended in 1840 and Dent moved to 82 The Strand where in 1843, the dipleidoscope was first marketed, he was also shortly afterwards responsible for the popularisation of the aneroid barometer invented by Lucien Vidie in France and went on to exhibit at The Great Exhibition in 1851.

By 1852 his brilliance was rewarded with the commission to manufacture the iconic Big Ben clock at The Houses of Parliament but he died in 1853 leaving his greatest commission unfinished. His step sons, Richard & Frederick eventually completed the work although Richard died of brain disease in 1856 and Frederick died shortly afterwards in 1860

The loss of the partners meant that EJ Dent’s widow was left to run the business with her son in law Thomas Buckney which it finally led to the formation of E Dent & Co in 1864. Thereafter, the company was successfully managed by the Buckney family and it was a J Buckney who in 1890 patented this boat’s compass binnacle where combined alongside the Dent boat compass it won the approbation of The Royal Navy, becoming their chosen standard. The War Department stamp on the side of this example indicating that it was in use by The Royal Navy’s inventory at some point during its career.