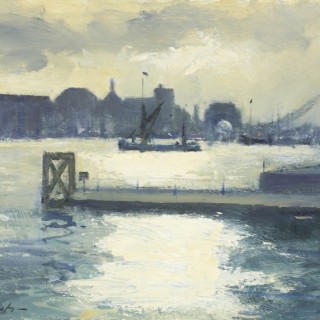 Ian Houston trained at St Martin’s School of Art in London after he studied at the Royal College of Music. In 1957 he met Edward Seago, and it was under Seago’s guidance he became committed to a career in landscape painting. Ian says “Ted was enormously generous and such a nice person. He used to give me a box of paintings to copy. I have still got a great love of East Anglia. The light is quite special and because it is flat you get wonderful skies.” Ian first solo exhibition was at Mandell’s Gallery, Norfolk in 1974. After this he bought the sea-going Thames Spritsail Barge “Raybell”(and subsequently gained Master’s Certificate) in order to study sea weather and traditional sail in action. Ian Houston has exhibited regularly in London and in the UK since 1956 and worldwide since 1970.